I’m pretty awful at museums. When we were young, my sister Katherine and I would be taken by our adventure-loving mother to various museums, often along with my friend Sharon and her mother (grown-ups needed other grown-ups to talk and smoke with). We went to the Wadsworth in Hartford, the Peabody down in New Haven, and even to some of the museums in New York City, where I liked the dinosaur bones almost as much as those irresistible paintings where somebody’s head was cut off and bleeding on a platter.

But in general I become bored easily, especially when things are as quiet as they are in museums. Makes me want to run screaming out the door.

So when we were planning a couple of days in Rome, I knew my museum tolerance would have to be taken into account. The Vatican Museum seemed like a must-do; can you really go to Italy for the first time at age 60 and not see the ceiling of the Sistine Chapel? I didn’t think so. But what else did I feel I just had to see?

Even if I sort of knew that Rome is covered from stem to stern with art, it still surprised me to just be walking down any old traffic-clogged hill, peer into one of those gated archways, and see things like this: 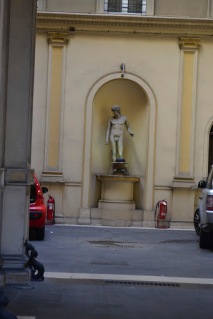 or wait, what’s behind this gate? 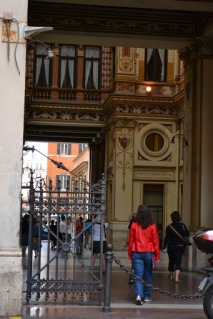 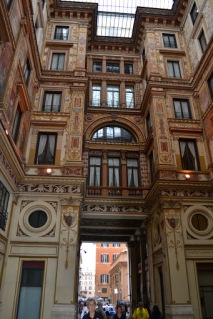 Or how about this? This is just a street corner:

A pretty interesting street corner, though –

“Street of the Four Fountains.” How do I reconcile these things with what passes for art in my own subdivision, in which, because of oddly named streets and their cul-de-sac spawn I can find myself on the corner of Moonshadow and Moonshadow?

I liked the worn-down, faded, really old things we saw, like the niche in the ruin of an ancient building we encountered on our way to the Colosseum: 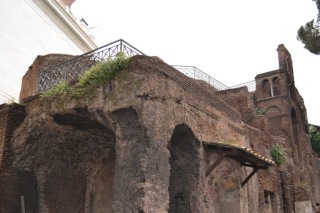 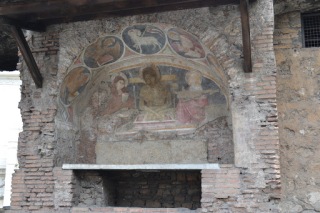 This antiquity resided very close to a structure that seemed to be soaring above the city – not only because of its high vantage, but also because of all those winged horses: 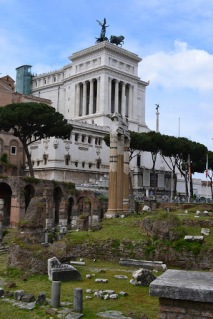 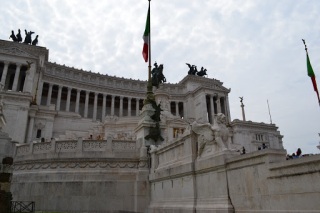 This is, of course, the controversial Vittorio Emanuele II Monument, built to honor the first ruler of a unified Italy. The Tomb of the Unknown Soldier is also located here. As one blogger wryly notes, if this was the structure that won the design contest, can you imagine what some of the losers looked like?

We made it to the Colosseum (which surprises you by looming up out of nowhere as you walk along a very busy boulevard):

It was a good place to have our first of only two guided tours. But while there are traces and remnants of elaborate frescoes, mosaics, and reliefs all over the place within those grand arches; and although our tour guide kept telling us to think like ancient Romans, I just couldn’t photograph them. Nor could I like the Colosseum.

Besides, this is about art. When I’d been poring over the map of Rome trying to decide how to choreograph two days so we might see a great deal but not wear ourselves out, I was happy to discover that our Pantheon-Colosseum-Borghese day would bring us past the Spanish Steps. Like any good English major, I copied Keats’s “Ode on a Grecian Urn” into my trip diary and held him close in my heart.

The speaker of the poem is addressing the figures on the urn with equal measures of pity and envy:

Fair youth, beneath the trees, thou canst not leave
Thy song, nor ever can those trees be bare;
Bold lover, never, never canst thou kiss,
Though winning near the goal – yet, do not grieve;
She cannot fade, though thou hast not thy bliss,
For ever wilt thou love, and she be fair!

We stood at the top of the Spanish Steps, and I looked down toward the apartment building where the 25-year-old poet died of, naturally, consumption; and I thought of all the wonderful, heartbreaking, unattainable dreams of my life that remain utterly perfect because they are still dreams.

The nearby statue of Byron gave me an excuse to trot out lots of English major trivia (is that a redundancy?) for Floyd, who was quite patient about it all.

And even if Byron and Shelley had made great fun of the delicate, super-romantic John Keats, my love remains undiminished.

To get back to the question of what I needed to see: Bernini. As with so many things in life, I found him accidentally, and because of Jane Austen. I can’t tell you how many times I’ve watched one particular version of Pride and Prejudice just for the moment when Miss Elizabeth Bennet is visiting the estate of Mr. Darcy and there’s a shot of her standing in his sculpture gallery in front of a statue of a veiled woman. A sculpted veil with a face “behind” it?  How could that be possible?

Then one day I’m scrolling through Reddit as usual, and here’s an image of another artist’s “veiled” statue. This is a thing? Like any modern student of the world, I ran a Google on the topic and discovered that some guy named Bernini had also sculpted a veiled woman, along with some perfectly astonishing other pieces.

And then a Redditor posts a photo of one small portion of a Bernini statue that is in the Galleria Borghese in Rome, and that was that. I had to go there and see The Rape of Proserpina. 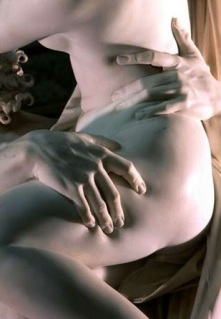 Obviously this photograph was not taken by me. It’s a good photograph, for one thing; and for another thing, the sign says “No Photographs” and people who went to Catholic school for thirteen years do not take such admonishments lightly.

Floyd and I just walked around and around this great masterpiece for many long minutes. If there were other people in that room, I cannot remember them. If there was other art, I can’t recall it. What I can remember is how those marble fingers press into that marble flesh, and how Persephone’s tears look on her cheek and on her breast. And how her hair flies, and how every inch of her marble body silently screams terror. And how you can see sunlight through her marble cape.

To borrow again from Keats, speaking to the Grecian urn:

When old age shall this generation waste,
Thou shalt remain, in midst of other woe
Than ours, a friend to man, to whom thou say’st
“Beauty is truth, truth beauty,” – that is all
Ye know on earth, and all ye need to know.
I had seen all the art I needed to see in Rome.