Buonconvento is a small medieval town in the province of Siena in southern Tuscany. That statement contains about four more things about Buonconvento than I knew when we embarked on this great Italian adventure. Wikipedia tells me the first description on record evidently dates back to 1100, and its walls started to go up by around 1371. Bonus conventus means “happy place,” and it was certainly that for us.

We had reached Buonconvento at the end of our bike ride from Siena, by which time I was about ready to be done with a bike ride. I’m not 100% clear as to how the final set of clarifying directions to our hotel was conveyed, but I know the phrase “go across town” was included, at which point my heart sank. But I put on the bravest face my sore parts would allow, and off we went, half-expecting the traffic of Siena to completely blast away the pleasant afterglow of lunch. Ride across town, find the gas station, go left and see the signs to the hotel. Ugh. I mean, Onward!

One block later, the gas station – maybe this wouldn’t be so difficult after all. I knew our hotel was on a hilltop, (Cf. the post that mentions “16% grade”) but the mind casts a merciful veil. As you can see from the hotel’s bike collection, lots of people seem to think riding on hills is great fun. Something you might even do on a vacation.

The very day after our arrival seemed way too soon to ride down to town and hike back up; but Floyd has a way of talking me into things and I always end up glad. Besides, I’d been talking with a woman my age who was getting into a car to be dropped off halfway to Siena so she and her husband could hike there. Who was I to complain about pedaling?

Look at that lovely Tuscan sweep of driveway! Woosh!

Look at that splendid countryside!

Think what a rush this will be! (See Buonconvento? It’s just a downhill run from here!)

Do not think of your future!

Hills never look like much in photographs, IMO. Do me a favor and keep in mind that the mini-me in this picture is halfway up the first of three.

Fortunately, we were using lunch as our main motivation, and I will put up with a great deal for food. More about that in a minute. First, the cemetery.

I’ve always liked cemeteries. They are peaceful and poignant and tell very detailed stories about people, neighborhoods, and eras. Our childhood neighbors across the street lived right beside old Center Cemetery, which had gravestones dating back to the 1600’s. We loved trying to read the worn inscriptions, some with dire biblical warnings, some decorated with those moon faces or Masonic symbols, some on gravestones that looked like rock tables still standing somehow on those centuries-old rock legs. Center Cemetery made an excellent shortcut home from school and had mild slopes that were a daring adventure for bicycling newbies.

As Floyd and I pedaled past the little cemetery on the slope down toward Buonconvento, I couldn’t resist stopping in.

There were graves from other centuries; there were graves from the past two years. Many showed signs of being regularly tended; while we were there a woman arrived to replace wilted flowers on one grave with fresh ones. Most of the headstones bore photographs, like the ones I remembered from the old sections of Mount Saint Benedict Cemetery in Hartford, where my grandparents were in residence. 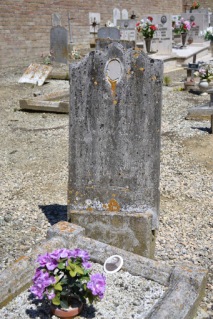 Some of the photographs had fallen off years ago. Whose purple flowers signal ongoing remembrance?

In one corner of the cemetery I came across a row of headstones with photos that looked like: grandmother, grandfather, little boy, little boy, littler boy, dad. I could translate the script well enough to see that the grandmother’s story was one of great sorrow. The grandfather, dad, and the boys – two brothers, one cousin – had died “one tragic afternoon in July, 1944, by a terrible act of war, leaving their parents to grieve for them.”

I couldn’t bring myself to take a photo, but that family resides permanently in my mind as a reminder of what war really means and what it really does.

It left me very pensive on the quick trip down to town; Floyd and I were both pretty quiet for the first few minutes as we headed into the old walled section of Buonconvento. Before we even entered, a struck arc caught my own dear welder’s attention. 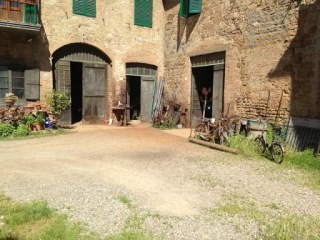 Next time I meet with my Italian tutor, I plan to offer him all my worldly goods in exchange for the words that would convince the elderly welder inside that shop-cum-home to turn his property over to us. After all, Buonconvento will need another welder when his time on earth is done. The lovely gentleman didn’t appear to have any plans for retirement.

We had a wonderful, if brief, conversation with him. I asked him how old the rusty bicycle on the left is, and he told me it had belonged to his father. It looked it. Gesturing to Floyd, I tried to explain that il mio marito e un saldatore, but I don’t think I succeeded. (Evidently, I speak Italian with an accent. Everyone I spoke to in Italy seemed somehow to recognize my foreign origins as soon as I opened my mouth.)

I did, however, manage to convey that we found Buonconvento beautiful. Non e una citta grande, I offered, which made him smile enormously and enjoy telling us no, no, Buonconvento is a small town!
Now I regret not having asked for his photograph, but at the time the very thought of getting Per favore, posso fare una foto? was more than I could contemplate. Besides, what if it was rude?

It would have been wonderful to spend more time with him, though, talking about his business and about his experiences of that terrible war. Although most of the people we encountered spoke plenty of English, there were many people who did not; I regret that my language skills are so limited. Later, Floyd couldn’t resist taking a picture of the home side of the welding shop as we were headed out of town. 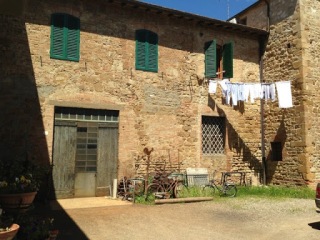 Upon our arrival, we rode slowly around the old part of Buonconvento, marveling at the town gate

with its tall old wooden doors

and the kind of hardware that makes me think this town really does need Floyd:

As noon approached we began to contemplate restaurants. One place looked intimidatingly formal. Another didn’t seem to be open on lunedi. One narrow little ristorante that had more tables outside than in looked wide open, but nothing was happening yet. I summoned all my courage and stepped inside, where a grandmotherly-looking woman was bent to her paperwork.

Obviously I am just self-effacing enough to tell you exactly how I asked her whether we could eat lunch, but I can’t for the life of me remember what I said. Miraculously she seemed to understand, and said, “Twelve-thirty” in a way that I could – also miraculously – understand. I am terrible at catching spoken numbers. So we did a little more exploring. I give you a few images of Buonconvento:

There’s something about a courtyard that seems magical to me, and of course, walled towns are full of them. On the one hand the acoustics must be very annoying; on the other hand, a few days after I took this picture we were roaming around the seriously narrow streets of Perugia when we came upon a violin lesson happening in one of the apartments. It was haunting and lovely to my ears. Although I guess the early days of violin lessons could be very trying for all concerned…

The above picture is just a little community beauty-spot, as far as I could tell, outside an area of apartments that looked like a fairy tale. 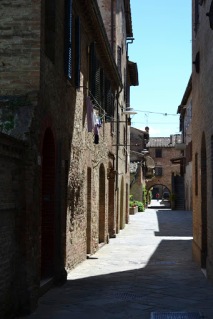 Shadier byways were remarkably cool on a day when the sun was quite enthusiastic. We did our best to imagine what walking these streets would be like in February, but by that time I couldn’t have cared less. Cold, schmold!

All the towns we visited have their bell towers, still very much in use. They tell you the time, and when you need to hurry to church, and when a young couple has just finished promising themselves to one another. I imagine they accompany you on your last walk out of your church, as well.

Twelve-and-a-half came at last, and with only minimal dithering we decided upon Ristorante Mario, where the hard-working nonna had explained when lunchtime was in words even I could understand.

The place got busier and busier: the outdoor tables filled, the indoor tables filled, and guests eventually had to be seated upstairs (!), including the British family with the huge stroller that could barely fit between the tables.

We embarked on a truly outstanding lunch – Floyd’s favorite food in all the places we ate, and for roughly half the price of most of them (I am leaving our 100 euro lunch out of this equation, but do not fear: we’ll get to it). That’s tagliatelle with a plain tomato sauce I’m having. It sent me straight to Marcella Hazan’s classic tomato sauce with butter and onion as soon as we got home. After the pasta I had a plate of Tuscan white beans, a dish I make frequently throughout the winter. I learned to increase the sage by more than I ever would have dreamed, and cut the garlic way back.

Floyd ordered pasta with a wild boar ragu which, sad to say, I am incapable of replicating.

Dessert, as you know, has nothing to do with need. This is how it happened this day: the Italian couple at the table right next to us were sharing a dish of tiramisu that looked so good I had the nerve to order it even after we had received il conto. The four of us just laughed in our respective languages over how scrumptuous it was. It was not added to the bill.

Remember that picture of me pushing that bike up that hill?

It was worth it.