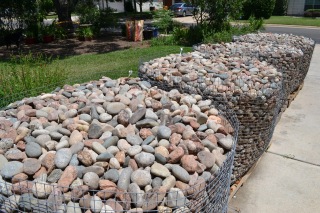 Question: Keeping sheer survival as a minimal outcome, how many pain pills will the Unruly Gardener need?

I realize that this is not a fair question. Many variables have been omitted, such as the Unruly Gardener’s insanity. Other medications should probably have been taken into consideration. But obviously the Unruly Gardener is not on any of those medications, or else why would she have decided to redecorate her front yard in the first place? Not to mention that it’s August in Texas; if a project were needed, couldn’t she have just painted a bedroom or something?

It must be that our recent rock adventures stirred up the longing. The large rock adventure is understandable, since by this time in the summer I am generally ready to replace every growing thing in our yard with inanimate objects made of stone and steel. But I’ve also begun to notice and appreciate how beautiful rocks are. I don’t know how I missed this for so long.

For the past several years I’ve had to pack lightly for my annual visit to my friend Mary’s, because I know I’ll be coming home with ten or fifteen pounds of beach rocks. While Mary is a born geologist, with geodes and malachite and who knows what all else on every flat surface of her house, I came to rock love very late in life.

Also, the ever-worsening drought in Central Texas has inspired more and more landscapes that require less and less water, which is a good thing. Even in our relatively conservative neighborhood, people are becoming very creative with pebbles, rocks, and boulders. Some yards are decorated with bits of colored recycled glass that have been tamed of their sharp edges. They sparkle nicely in the sun.

I am not helped by the fact that Floyd’s welding shop sits on property belonging to a stone merchant, making it way too easy to indulge in rock daydreams. Just about every week for a year I’ve been hinting that he should bring me home more treasures from Daniel Stone. (When I go there myself I am careful where I walk. Not only is the terrain naturally jagged; not only do I imagine venomous snakes under every pallet; but when you walk on a steel path here or there it may well be a giant scale. Your weight will be displayed in large bright red lights for anyone to see.)

In any event, about a week ago we ordered seven tons of river rock that were delivered to our driveway bright and early on a Monday morning. Coming home from work I had one of those “Yikes!” experiences as I drove in. Obviously, something had to be done with them.

I would like to point out that the wheelbarrow belonged to Floyd’s grandfather, and Floyd’s dad replaced the handles with the ones we now grasp – thinking of him every time we use this venerable 80-year-old workhorse. Do you imagine your grandchildren will be doing their heavy yard chores with the wheelbarrow you bought at that big box store?

When we first moved into this house, a good chunk of the front yard and a long stretch between the front sidewalk and the curb were a foot deep in Asian jasmine. The fat notebook left by the house’s first owner indicate that she ordered 300 jasmine plants, and I wouldn’t doubt that for a second. It took me two years with shovel, pitchfork, clippers, and an impressive vocabulary to get that noxious weed out of there.

Under the big live oak, I replaced the jasmine with a layer of landscape cloth and some nice dark mulch. Between the sidewalk and the curb went pink granite and some stepping-stones. I can’t really explain why I went that route, when what I’d really wanted for both locations were river rocks. I can’t explain why I decide things in the first place, let alone why I change my mind. The little stones were annoyingly difficult to clean: sweep and you sweep them away. Use the blower, same problem. Try the milder yard vacuum and achieve zero results, leaving sticks and dead leaves right where they fell. Unacceptable.

Ultimately, this entire project could be characterized as an object lesson in landscaping: Do what you really want to do in the first place. It may save you quite a bit of effort later.

It took me a couple of weekends to do the prep work: removing the old mulch and landscape cloth from under the live oak; shoveling up this expanse of pink granite and sifting it through a screen to separate it from the more decomposed granite beneath;

and sending huge buckets of the remainders to fill big divots in the driveway at the welding shop.

Just as tedious prep work gives way at last to the fun of actually painting, it was very pleasant to start placing the rocks.

On the negative side, I spent half of the first day struggling to dig rocks out of the four-foot-high chicken wire bin – and I have the arm-scratches to prove it – because I thought Floyd meant to return the pallets and the intact bins to the stone store. Although I like to tell people I’m 5’11”, in reality I am not, so digging into those containers was really difficult. When I asked Floyd what the secret to digging rocks might be, he said, “Brute strength,” leaving me pretty much in for a very long and tedious few months. Loading rocks onto a shovel by hand is a remarkably slow method.

When he told me I should just cut the wire to make a funnel, I was too grateful to even be annoyed by my misunderstanding. It’s still not exactly a walk on the beach, but pushing rocks out of the bin is about a thousand times easier than trying to scoop them up at chest height. Once the funnel was below wheelbarrow level, I was able to make much better use of the shovel – it’s a lot easier when you can push a shovel with a foot rather than just your hands. Go figure. 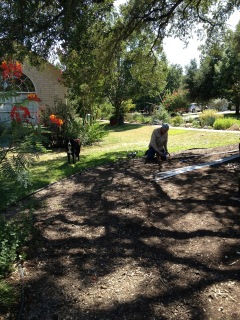 Here, Floyd and Travis are measuring and cutting steel to line the area between the sidewalk and the curb. Floyd wanted to match the look of the sidewalk garden, and that little lip of steel prevents a whole lot of rock escapage. Not to mention that it looks spiffy. Although his feelings were hurt by the lack of fetch play, Travis was very cooperative about getting far away when sparks were flying or welding was happening.

One aspect of this task that kept me in a buoyant mood all weekend was washing off the rock dust. These new river rocks, even when dry, are very pleasant to look at:

When wet they are breathtaking, to my mind. Another reason to celebrate rain!

I have to be honest: I have thoroughly enjoyed moving all those rocks. It’s been a treat for my office-and-classroom-bound body to work that hard in the ridiculous August sun. I strapped on my new iPod, set my bicycling playlist on “Shuffle” and did a fair amount of dancing in the yard. Sorry, neighbors. Evidently I even sang quite a bit. Although one woman walking by was very kind about that, I’m still almost embarrassed. I say almost because by the end of the second day I had transcended shame: I didn’t care what I looked like, smelled like, or sounded like any more. Kind of like the way you feel at the end of a hard athletic event.

If you haven’t spent much time playing outside in wicked heat, you should probably be very cautious about tackling a heavy chore like this in summer. I made sure to drink water by the quart, take in a fair amount of electrolytes, go inside periodically to cool down, and pay attention to my body’s signals. I kept sweating profusely (good sign), produced reasonably clear urine the whole weekend, never had a headache (good sign), never felt dizzy, nauseated, or chilly. As a matter of fact, ibuprofen was all I needed at the end of the work days; and although my body was fatigued on Monday and Tuesday, I was astonishingly free of pain. Thank you, body!

I was chatting with a friend who’d been watching me work while Floyd took his usual Saturday and Sunday morning bike rides, implying that fur would have flown at her house over something like that. But not only has the physical challenge been very – good gravy, I was about to say “uplifting” – gratifying, I also have a slightly odd marital problem.

You see, Floyd was raised by a wonderful man I’m sorry never to have been able to meet. A man who set a sterling example in doing for others and making a wife’s every wish come true. My mother-in-law Marye tells wonderful stories about her late husband – like the time they were at a fair and a certain tea cup and saucer caught her eye. She wanted it for her collection. Charles just sort of lead her away, letting her know she didn’t really need any more tea cups and saucers. This was very annoying to Marye.

Somehow in the course of the day Charles managed to slip away, and at the end of the day, of course, he put the cup and saucer into Marye’s hands.

I try to be very careful about asking Floyd to do anything, because I know he will go above and beyond the call of duty, putting in more time, care, and energy than I would ever ask. So I try not to ask him to do much.

At least, that’s my view of the situation. You’ll have to ask him his opinion.