Our house stands in a remote corner of a housing development that bills itself as our fair city’s “First Environmentally Planned Community.” On my crabbiest days I have asserted that its environmental planning is limited to privacy fences and only the blandest exterior paint colors, but now that rain barrels and metal roofs are appearing in impressive numbers, I’m often able to turn my attention to some of the ‘hood’s positive aspects. END_OF_DOCUMENT_TOKEN_TO_BE_REPLACED

This post has nothing to do with gardening, food, or pleasant vacations near large bodies of water. It is a post about what can happen with a house on the heels of what seems like a perfectly good idea on the heels of what seemed like another perfectly good idea. Because house projects – as you know if you have ever lived in a house – follow the Domino Theory. One thing leads to another thing that leads to another thing, and before you know it you are living in dust up to your elbows and fighting with your most dearly beloved. First-world problem? Oh, yes. END_OF_DOCUMENT_TOKEN_TO_BE_REPLACED 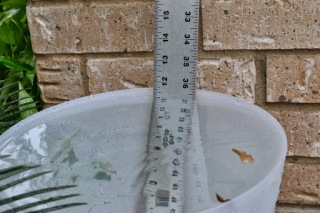 It’s Monday morning and I need to get myself to school, but thinking about last Saturday night is more fun. We weren’t at a party or dancing downtown – you don’t go downtown while the Austin City Limits  Music Festival is going on unless you savor driving alongside the inebriated and the out-of-town inebriated – we were spending the night sleeping off and on, directly under a storm cell that dumped up to a foot of rain in our area. It’s been a long, long time since we’ve had a wild storm like that, with the near-simultaneous lightning and thunder, and the windows rattling in their casements. END_OF_DOCUMENT_TOKEN_TO_BE_REPLACED

One of the few written accounts of the events around Vesuvius that laid waste to Pompeii, Herculaneum, and surrounding towns nearly two thousand years ago was written by Pliny the Younger, nephew to the great scientist-author-naturalist-statesman-admiral. (Pliny the Elder was evidently a very busy man.) While his uncle rounded up the fleet and sailed straight toward the catastrophe, Pliny the Younger stayed behind and documented it. Apparently his descriptions were so accurate (rather than speculating about what the gods might be trying to say, as I probably would have done, he wrote down exactly what he was observing) that a certain type of volcanic eruption was named for him. END_OF_DOCUMENT_TOKEN_TO_BE_REPLACED

As usual, it was difficult to believe that summer would ever end. And as usual, it has. First the light changes: you look out your window at a certain time of day and the sunlight is just different. It’s gone from white-hot to yellow, and the clouds have softened around the edges. The sky is darker when you leave work at six or seven. Mornings and evenings are mild again. You can hear dead leaves skittering down the street, and the wind just might be out of the north. Moods brighten. Everyone breathes a sigh of relief. END_OF_DOCUMENT_TOKEN_TO_BE_REPLACED