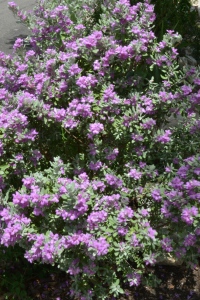 of effort into draining the rain barrels because sky-water was so strongly predicted. Not only by the local rag’s “forecasts,” but also because every single Texas sage (short, tall, new, old, free-form or trimmed like a stupid giant basketball) has been absolutely dripping with blossoms all week.

I simply couldn’t imagine that I might be falling victim to a false positive. Would the Texas sage do such a thing to a poor little old lady like me?

At the moment it’s nearing one p.m. on Thursday, and I am suffering some serious doubt that we shall be having any rain at all. Oh, me. I hope I have to type in a correction before this post is published.

[It is now the following Monday. Early afternoon. Although it is difficult to report, and I’ve gone so far as to avoid this whole blog for days, I feel I must tell you: the sage has lied. Ten million million purple flowers on lovely gray-green foliage in yards and gardens and parking lots and abandoned properties for miles around. All making me hope, all liars. I feel like all my medical tests (well, I haven’t had any but suppose I had) came back with a clean bill of health and just as we were popping open the champagne, the phone rings… The sage has lied. Let us speak no more about it.]

It does no good to focus on heartache.

As summer school winds down and August begins, I find myself pretty tired. Although I always like to rise early, I don’t enjoy shuttling myself out the door and off to work early with no time to engage in the piddling I like to do around the house and in the yard. By the time I get home in the evening, many of the leafy things are sagging as much as I am. We may be having a mercifully, oddly cool summer – marred only by fears that the first of September may bring 110 degrees that will stick around every day for years – but there is no rain. Dust is starting to form. Dust wants to take over.

The butterfly weed (Asclepias tuberosa) is

making me happy, though. A couple of years ago I only had one; then it did what good weeds do, and now they are scattered throughout the sidewalk garden. I love them even though aphids love them too. I decided to open with this dramatic photo on the right because of the colors, but I also want to celebrate this humble little wildflower in its progression from candy-looking little buds to feathery wisps.

The fullness of summer. When I was a child, August meant a great array of local produce sold from small farm stands redolent with the scents of peaches, plums, fresh greens and the unmistakable smell of sweet corn just in from the field. My father, who ordinarily had very rigid standards regarding a proper supper (A Meat, A Potato, A Vegetable) became someone quite different.

Suddenly a mountain of steaming corn on the cob, a platter of dark red sliced tomatoes oozing their juices, and bowls of strawberry shortcake constituted not only a proper supper, but one during which moans and groans of pleasure were a virtual requirement. Sometimes he would make a succotash that could make anyone love lima beans; we ate it accompanied by seeded rye from the Jewish bakery on Albany Avenue, spread thickly with sweet butter.

Over five decades later, I look back on these summer dinners with a mixture of nostalgia and the kind of crushing disappointment that accompanies so many “you can’t go home again” experiences. These days, watermelon disappoints every single time, and even home-grown tomatoes fall sadly short. It’s sacrilege to say it aloud, but farmers’ market produce doesn’t really measure up, either. Several times a summer Floyd will bring sweet corn home from Central Market and grill it; while it’s often truly delicious, it can of course never equal the corn my father picked up on his way home from work – corn picked within hours of our evening meal.

Most of the time, food-lover that I am, I’ll take close-seconds happily. One of our favorite little local restaurants is always doing interesting things from Austin’s much-beloved Boggy Creek Farm. I hate to get all provincial on you, but I swear Connecticut produce tastes better. I’m up there often enough to be able to say it’s not simply childhood memory surpassing anything the tawdry present has to offer.

If you doubt me, go on up to New England right now, find a small farm stand outside a small town, and ask for a dozen ears of butter & sugar corn and a dozen tomatoes. Fill a small paper bag with plums so juicy they will drip all up your arm and make a mess of the inside of the rental car. Or visit in October and visit a real old-fashioned cider mill. Drink a sample. Write to disagree with me if you wish, but be sure to send me samples, so I will know if you are correct. Just sayin’.

The crushing letdown of rain that jilted us was only one contributor to my low mood over the weekend. For me, August in central Texas brings the first inklings that death is just around the corner. The butterfly weed is a perfect example of how quick the transition is from being in full bloom to passing life along to the next generation. As I write this, many of the neighborhood’s great agave are also pushing us to come to terms with the fate we all must share, like it or not.

I mentioned one agave months ago, when its towering stalk looked to me like a giant asparagus pushing for the stratosphere. It takes weeks for the buds to form, and they take their time about opening, too.

The yellow blossoms in the center photo were alive with honeybees in their prime; then slowly, gradually, the yellow fades to deep golden brown and their time is past. The bees are done, and closer to the ground this great agave – easily six feet across and utterly treacherous with needle-sharp spiked leaves (decorated with shining silver balls at Christmas) began to sag. Soon, like all the flowering agave, the base of the plant collapsed in on itself as if melted. 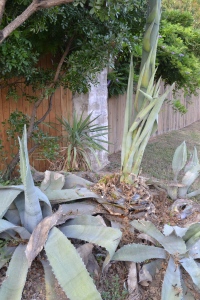 By the time I took this photo, most of the melted leaves had been cleared away. Next spring those pups will be nearly twice the size they are now, their ancestral plant gone and forgotten. There should be something comforting in here about cycles of life and all that, but I’m not in the mood.

We’ve had a good number of butterflies over the past few weeks, from the vivid orange Gulf Fritillaries to splendid blue swallowtails dipping in to lay their eggs in the backyard fennel.

I was watering around the pomegranate

one morning when a splash of orange caught my eye down in the dark mulch under the purple lantana. I don’t often find a perfect butterfly corpse (I don’t even want to write “dead butterfly” somehow, as if those words don’t have any way to fit together in my mind. If anything, I could borrow Mma Ramotswe’s Botswana way of saying “late butterfly.) but here one was. I brought it in to see what it would look like on black granite, and later took it to reside in a glass jar of seashells in the front bathroom.

So the much-anticipated rain never came, and now it is one hundred degrees every afternoon. This weekend I will pull the late plants from their beds to save Floyd from worrying about them while I’m away. A week from this moment I’ll be in my California home with my best girl Mary, sipping something delicious and weak with relief as the year’s hard work gives way to two weeks of play alongside the Pacific.

Mary says the figs are early this year. She says the backyard has been redolent with their perfume.

All my fingers are crossed that some of them – maybe at the very top of the tree, maybe deep in the fragrant leafy shadows – some of them will wait for me.