This odd jumble of steel, stone, and seashell, crystal, wood and light, is a stolen image. I spent a little time last week taking photos at my daughter’s house. It is a place where imagination trumps all,

and you’re kind of expected to do creative things. Every room is a workshop.

Tracy can cut your hair, give you the best color you’ve ever had, weld you a gate, create fanciful magnets embellished with shells and sea glass, show you her collection of vintage motorcycle parts, feed you with eggs from her back yard chickens, paint you a picture, or create a glass mosaic. Among other things. She’s pretty amazing.

I feel like that today: random piles of collections waiting to be made into somethings.

We’re having a cloudy day today, cool ahead of what’s supposed to be a freeze two nights hence. The local rag’s weather forecast for today was a perfect example of how they pay the light bills in Vegas: declaring a 40% chance of rain during the day and a 50% chance tonight, the lead declared a 90% chance of rain today. I have come to the conclusion that robots “write” the Austin American-Statesman.

As of yesterday morning, the season’s

interior paint project was absolutely, utterly and completely finished. I’d slapped the aubergine up onto the wall as Tracy had directed, then yesterday Floyd took down the cover over the vent hood’s pipe so I could paint underneath a bit and clean up the stainless that I can’t ordinarily reach. My use of a step ladder placed on top of the counter meets with near-universal disapproval, you see.

But it wasn’t falling from a great height that had the best of me yesterday, it was a dream.

I’d dreamed of cutting one of my fingers pretty badly, really messily. In the dream Floyd had to take me to get stitches. So I was not at all surprised when, cleaning the vent covers in real life, I sliced my right index finger pretty impressively. Wouldn’t you think by now I might have figured out that stainless steel can have some daunting edges? Even bandaged up that pesky digit kept dripping red all over the place, which I found amusing. I kind of like the idea of bloodstains on the last paint can I intend to employ for a while: it makes a statement.

Meanwhile, I’m anticipating the arrival of the long-dithered-over FitBit and wondering how on earth I will manage 10,000 steps a day. Best friend Mary and her sister Joanne are already egging each other on to more and more steps (there will be no catching up with Mary, especially now she’s retired and all she has to do is putter in the yard and walk miles of Pacific coastline every day), so I am way behind.

I’ve been trying to get in at

least four miles around the neighborhood four times a week, which brings Travis and me through the woods to a swollen, rushing creek and along all the streets where signs of spring swell. Trees are in bud, some have been brave enough to put out their flowers, some wait. It’s hard to know which plants to believe.

In the sidewalk garden, Valentine’s Day is the day when we cut the roses down to nothing here in Austin. Next day I carried out a bit of a crape myrtle experiment. I know they say not to cut them back like so many people do; but what if I prefer the results the cutters get? So I cut back three. It’s hard to know which experts to believe.

The purple lantana are putting out 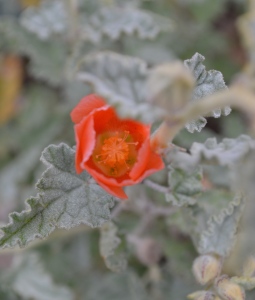 far more leaves than they had this time last year, and the waxy pomegranate leaves are proliferating. I’m so impressed with the Desert Mallow (Sphaeralcea incana) that I have been eying bare spaces for their suitability. If a plant works, why not have a collection of them? That vivid orange in silvery foliage!

Darn late winter and its random weather anyway. I was so traumatized by last winter’s late freeze that I can hardly enjoy what’s growing now for fear it will all be black stems and frozen black leaves any morning. Takes a lot of the fun out of enjoying these early arrivals. At least all summer you know what to expect.

Now is the time of year when all around the neighborhood and alongside freeways, a popular giant shrub is putting forth some of our traditional first bursts of yellow. I am too unbelievably lazy to get up to fetch my plant books, or even run a Google on its name; but I doubt you would want to plant this puppy unless you have many acres to fill with enormous shrubbery that

looks wonderful for about a week per year and spends the rest of its time sending up shoots that little by little take over your yard and make decent headway into your house. Having lived with one yard that had this thing planted in it, I can tell you that even keeping it under control is a halftime job. This is one of those takeover plants that I prefer enjoying through my car window as I drive up MoPac.

At least I used to enjoy it; MoPac is currently torn to shreds up both sides, nothing but dirt and heavy equipment right up to the back fences of the people who just a few decades ago resided in peaceful residential neighborhoods. As much as I look forward to some improvement in our horrendous traffic situation, I hardly believe a couple of toll lanes are going to do the trick in this case. I found myself wondering on my drive home yesterday how many people in Austin really need to go into an office to work. How many hours do people really work anyway? Why can’t employers have more staggered work hours for people to choose from? When will I finally be elected Queen of The Universe so all problems will be solved at last?

On a much cheerier note, These euphorbia

are looking lovely everywhere. Many of my neighbors have them in their landscapes and rock gardens. I have a few in the sidewalk garden, and a great spray of them in the raised bed in back. They don’t seem to need much attention and create a nice burst of color, their blue-green leaves giving way to vivid yellow-green flowers. They are new to my life, and I’m heartened to see new leaves appearing at the base of the stems.

Meanwhile in the woods 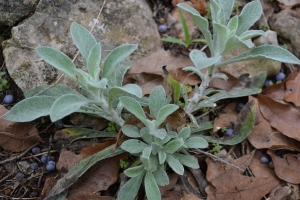 greenery emerges from the damp leafy ground, clings to rocks and tree stumps, and gives me clear visions of the only things I ever really ought to plant: things that don’t need humans at all.

Speaking of the woods, there’s a big neighborhood discussion going on these days about the cedar trees that abound in the greenbelt. Neighbors whose back yards are adjacent to the greenbelt not only have to live with coyote and rattlesnake visitors on their patios, but also acres of dead cedars and the constant threat of wildfire. Our Homeowners’ Association “allows” residents to clear anything up to thirty feet from their homes, but clearing anything beyond that requires permission, which has some people up in arms. We’ve been told there is some disagreement from experts regarding the benefit of clearing dead cedar; a report to our Firewise Committee is pending. I’ll pass along whatever information comes to us, for the curious.

It’s an interesting conundrum I’m sure many people face: when you live adjacent to a treasured natural space, how much should you be allowed to intervene in its naturalness? Some people want to trap the coyotes, kill the rattlesnakes, and manage the deer population, all of which are abhorrent to me. I’m sure I would feel differently if I lived right on the greenbelt, but we consciously decided against that when we moved here.

Besides, from what televised coverage I’ve seen of wildfires, I don’t think a hundred feet will save your house from a raging inferno. When the greenbelt goes up in flames, we will almost all be displaced. On our recent trip to Nacogdoches we went east by way of Bastrop, where scars from an enormous wildfire three summers ago still dominate the landscape for miles. Long stretches of tall black stalks, all new houses, and infant pine trees just beginning to emerge from the scorched earth.

Life with nature is a constant search for balance, our species holding all the big weapons and the hubris to use them. But I’m hardly going to volunteer to go out and live under a rock, so I can’t be too disparaging of people who want to “manage” the nature that exists thirty feet from their back door.

Last week Travis and I encountered

sage, yucca, ferns, and an amazing array of mosses that range from deep green to nearly neon. Of course our yard does not maintain moss conditions by any means, so they are nice to look at as long as you aren’t slipping on them. Years ago I saw an issue of Sunset magazine with an article about moss gardens; I thought it would be a wonderful landscape to have. How could such a place not be populated by fairies with tiny twinkling wings that sparkled all night?

We aren’t ever completely without color, but winter is relatively drab, so the return of greenery is always welcome. February is such a roller-coaster month around here: always we go from sweatpants to shorts & tank tops and back to sweats. Not that I’m complaining, mind you – my New England family is going through a rather picture-book-cum-horror- story winter of one snowstorm after another. So I’m not complaining, just saying.

Random thoughts in mid-February, when there’s not too much to do outside except wait for the oak trees to finish shedding so I can clean up leaves once and for all, and have a game of keep-away with Travis. In the house I’ve returned to a counted cross-stitch project I’ve been carrying on with for a couple of years.

That’s how quiet it’s become around here. It’s enough to make me want to drive on over to the Natural Gardener and start daydreaming about plants I really don’t need.

Not that need has anything to do with it.