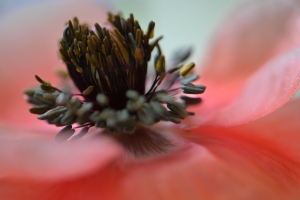 Merely puttering, planting, mulching, watering, pruning, ripping out, and committing wholesale slaughter (against aphids). It’s April: what else is there to do?

I certainly haven’t been sitting at a keyboard if I could help it, although I have managed to stitch up two dresses in plenty of time for summer school. I’ve been walking a lot – even managed to defeat my friend Mary one week in our Fitbit Number of Steps Taken contest. It only set me back a little to learn she’d had a virus that week and had hardly left the house.

Mostly I’ve been looking at flowers. I want to

show you a few.

This is a “Brazos Penstemon” I just came across at The Natural Gardener. It’s a compact little thing, about fourteen inches tall and six across, covered with these purply-pink little bells. It happens to reside next door to a great spray of Coreopsis, whose yellow flowers create one of those unmistakable spring color combinations.

Supposedly it blooms between March and May, which will work in this part of the sidewalk garden because the nearby Rock Rose will have come into bloom by then and the purple lantana as well.

On that same nursery run I picked up 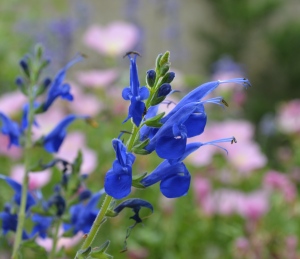 a salvia with flowers so blue I can hardly believe them. For the moment they stand up against the pinks of roses and Mexican primroses, creating a powerful contrast. I have no idea whether this little puppy will thrive, but sometimes I can’t resist a blast of color no matter what its long-term prospects may be.

I’d say I’ve added a dozen new residents to the sidewalk garden this year. There are always a few spots that look empty at this point in the growing season, and gardens abhor a vacuum. The Coreopsis surprised me, as I hadn’t been aware of planting any; but you never know what handfuls of wildflower seeds will yield.

There are three types of poppies in the yard 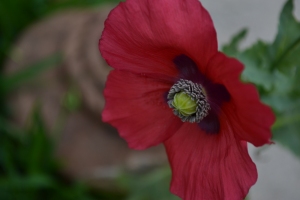 now, and I will simply leave them alone to return as they will. Last year I sprinkled poppy seeds all over the place from the plants I’d purchased and they seem to have produced some tiny specimens. Is this normal poppy behavior?

This vivid dude sprang up right beside the driveway. I had to mark its presence with the little clay pot you see on the left, to prevent death by lawnmower. Now I have to try to avoid thinking the poor little thing looks lonely and forlorn standing there all by itself, lest I decide to slice up an eighteen-inch swath of grass alongside the driveway and plant it some friends. True madness lies along roads like that; I’d be expecting Travis not to step on any of them, which is a great deal to ask of a dog with a ball.

I’ve been spending more time than you might think reasonable just taking in the evocative scent of the huge Lugustrum that stands between our house and next door. It’s shaped into a tree, with branches still hanging low enough to annoy my dear spouse pretty much every time he takes out the trash. A short person like myself can easily pass beneath; but I absolutely refuse to cut them back before the blossoms are over. Their pungency is a scent straight out of my childhood – salt air in the yellow tilt of late afternoon summer sun, and sandy muslin sheets close behind. I need what seaside I can hold onto.

Ours had not one blossom last year after 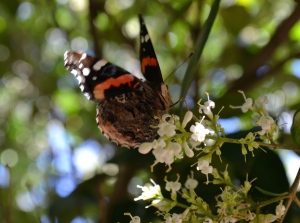 that mean final frost, and this year the tree is a cloud you can smell all over the yard. These days it is abuzz with many hundreds of bees, and fluttering with dozens of vivid butterflies that fly up in an explosion when you walk beneath the laden branches. I try to walk under there ten or twelve times a day. After all, we won’t have any more floral scents before too long, and our summer is merely the smell of sun and parched grasses.

Cactus flowers have begun to make their

appearances, and I can’t resist taking portraits. As I’ve said before, it’s a pleasure to photograph subjects who know how to sit still – usually the very sound of my lifting my tripod is enough to get the wind stirred up, and the click of my macro lens has been known to trigger gales. But in the gray light of a damp morning, prickly-pear blossoms are like small sunrises, muted tones against the blue backdrop of the Harvardiana agave.

When the flowers open a few hours later, a

bright red vista is exposed, surrounded by intense yellow petals. This is a good time of year to take a walk in the greenbelt with someone who knows where great fields of cactus are in bloom – keeping in mind, of course, that more than one rattlesnake sighting has occurred in our immediate vicinity already this season. (“Immediate vicinity” in this case meaning within two blocks, if you were perhaps thinking I am being overly dramatic here.)

I don’t need to brave too many venomous 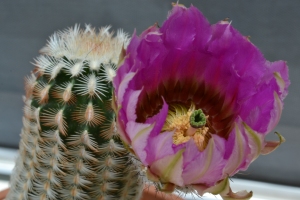 creatures to get photos of the cactus in my yard, though. This one lives in a pot on the back patio, its flashy pink petals like a lantern in a lovely new space that was created for me as a birthday gift. On the inside it looks like a sweet confection, yellow-orange cotton candy and a crown of tiny green gumdrops. Flowers that show up once a year must be paid attention to, so I end up just walking around the yard from one to another, looking, I imagine, as if I’ve dropped my keys somewhere.

In the front yard the Pineapple Guava (no 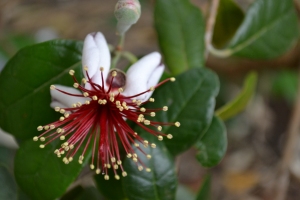 pineapples, no guavas) is  beginning to blossom. I must give due respect and admiration to these flowers: they simply amaze me, I don’t know why. With flowers, it seems foolish to even ask. Just be amazed.

When this year’s flowering is through, I plan to trim back all the lowest branches en route to shaping this specimen into more of a tree. I saw one shaped like that here lately, and it never hurts to have a future puttering project in one’s back pocket. (When I told Floyd the other night that the yard was really finished for the year, he didn’t make a sound. This is so often the best move for a spouse, don’t you agree?)

I think I’ll begin and end with poppies, 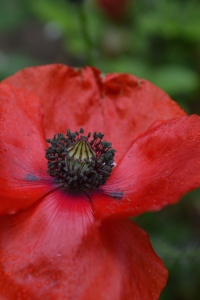 because I can. This third variety took hold in the steel planter in the back yard, where it resides between a Yucca and a Shrimp Plant. Driving all over town these days I see masses of poppies, and it’s a nice trend to have joined. I hope each one has takeover ambitions.

It’s the end of April. We’ve had enough rain to make all the foliage jungle-thick alongside the roads. There have been many pleasantly cool days, and one brief but impressive hailstorm. It always seems there will be hail once the tomatoes have set their fruit. Fortunately, the stones were merely little-fingernail sized, not big enough to do much damage. The evenings are truly splendid.

All the rain barrels are filled to overflowing; new plants have been introduced to the garden’s senior members. Twelve quadrillion live oak leaves and ninety-three tons of live oak flowers have been blown, swept, bagged, and sneezed over.