I don’t know if it’s el Nino or what, but we’ve been enjoying cool temperatures and sufficient rain to convey a definite sense of life in a rain forest.

Rain dominates our forecast for the next week, and all of us have our fingers crossed that some of those clouds will hover over the highland lakes – still at only 38% of capacity. Maybe the time to buy “lakefront” property is now, while the water’s edge is still two hundred yards away and the boat dock is a broken, landlocked ruin.

Travis and I, just in from our walk, could tell you a bit about mild-cum-humid: I’m drenched and merely glad it isn’t hot yet. The air outside is motionless and visible.

Meanwhile, here in suburbia, the

gardens do what they do. I’ve been very pleasantly surprised to see lavender take over a quarter of the square-foot garden. I haven’t grown much lavender in the past; its love of plenty of water and excellent drainage was too high-maintenance for me. But a couple of years ago, no doubt inspired by the Blanco Lavender Festival, I put a little one in the corner of the herb bed. Somehow it made it through this past winter and now it is three feet in diameter, a fragrant cafeteria for dozens of honeybees.

Nestled in among the herbs I grow

strictly for caterpillars, three or four basil plants seem to be getting just the right amount of sun. Although I’ve been told basil will tolerate full sun just fine, mine always burns to a crisp without some protection. Once the caterpillars appear, I’ll put a shade cloth over the bed in a hopeful attempt to prevent all of them being eaten. Since the mint is of course having a heyday, while the caterpillars fatten up on parsley, dill, and fennel, we’ll have the raw material for pesto and mojitos galore. Everybody wins.

As if that lavender weren’t surprising enough, 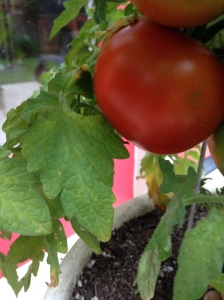 I appear to have nurtured some actual food into existence. I say “nurtured” because the plant came with tomatoes – all the blossoms on it died soon after being placed in my care. There aren’t a great many fruits on this poor plant, so I’m figuring they’ll run about three dollars each. The rainwater on which they’ve been nurtured was free.

Meanwhile, perfectly delicious tomatoes are available at Central Market, Whole Foods, Wheatsville Co-Op, roadside stands, and any of the dozen farmers’ markets we have around town. For way less than three dollars each. But at least I can say I grew some tomatoes once.

This year I’ve put about a dozen new

plants into the sidewalk garden. The early season bare spots always get to me, and when rain hit the forecast with some sincerity, it was a good time to empty out all the rain barrels to make room for nice clean fresh water, and so a good time to get some new residents started. I’ve resolved to keep the purple lantana at a dull roar, allowing some of the new kids to be seen. Pink gaura is perpetually irresistible, its flowers hovering like butterflies on long stalks, deep pink against the spirea’s foliage.

Pink skullcap is also coming into

bloom. This one lives alongside a rosemary, seeming to pour itself out from under the fragrant shrub. Its other neighbors are oregano, one spineless prickly pear, and the splendid Harvardiana agave that is such a beautiful silver. With so many things happening in every corner of the sidewalk garden, I find I have to walk up and down eight or ten times a day just to keep abreast of new colors emerging.

Lest you think pink is all we have,

allow me to reassure you that this is not the case. Cheerful yellow coreopsis faces shine all over the place, summoning your attention from the top of their long stalks – stalks that have a very hard time remaining upright in the kind of winds and rains we’ve had this past week. But even the blossoms on stalks bent to the ground look up brightly, not wanting anyone to feel sorry for them.

Much to my surprise, the little screech owls remain in residence in the live oak. I heard their trills just this morning. Usually, in a year when they’ve had young, we’d have seen the babies by now, bobbling in the owl house doorway like very confused muppets. By the weekend of Mother’s Day, they’ve taken to the woods for the summer. Will definitely keep you posted, and hope I can get a decent photo of any youngsters who might be present.

I spend more energy worrying about the fate of our screech owls than seems quite reasonable. Nearly had a nervous breakdown a couple of weekends ago when I thought the female had an injured wing and was no doubt dying right before my eyes. Nature! I tell you, I just don’t know how much I can take.

It’s much easier to think about

cactus, especially now that new cactus flowers are appearing every day. It’s one of those things you just know about the American southwest; who doesn’t think of cactus when they think of Texas? I can’t imagine why they surprise me every spring. But on the other hand, it wouldn’t surprise me to see a zebra or giraffe walking around in our woods, either. I may have lived here half my life by now, but it’s still not unusual for me to think, What, Texas? Texas? Really?

At the same time they are pushing 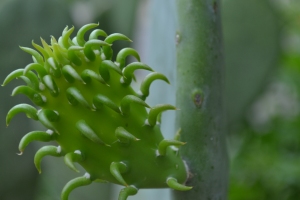 out robust buds, the cactus are creating new paddles that look like cartoon animal ears. I can already see where some will have to be removed in order to keep them away from the sidewalk. Probably a fair number will end up propped in a pot of sandy soil and given away once they’ve taken root.

Out in the wilds of the ‘hood (like about a block away), rattlesnake sightings continue to be reported. The coyotes have had their pups and therefore their known residential areas in the greenbelt are to be avoided, especially if you’re out there with your own pup. Travis and I watched a coyote cross the street as we went along the sidewalk just a few days ago. Well, I watched one; Travis remained brilliantly oblivious. One neighbor’s dog was bitten on their walk, but no harm done other than the sheer terror of being attacked by a wild animal. I guess every place has coyotes now.

A lovely and dependable 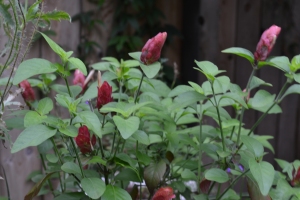 experience of spring is that pleasure you feel in discovering which citizens of your landscape made it through the winter. They are like old friends who’ve been away, back now. Especially when they inhabit the landscape of an unruly gardener who may or may not check the handbook when cutting back. Was I supposed to cut this one to the ground? Does this one come back from the roots, or leaf out on its stems again? What day is this? Do I have a two o’clock appointment?

That shrimp plant has been joined in the landscape by two newbies I picked up from the $3 throwaway table at Lowe’s. Let me tell you, a shrimp plant can look like not a whole lot and still regenerate some top-notch foliage and bust out quite an array of pink and maroon flowers that create nice bursts of color in the semi-shaded spaces.

I’ve been enjoying the new shade

structure Floyd assembled for my birthday. In two of its corners hang baskets of bougainvillea, just as they are supposed to do. I ordinarily wouldn’t bother with them, as they will need a drink every single day we don’t have rain; but you can’t have a patio shade without bougainvillea, I think.

When I grow completely weary of such maintenance levels, I may transition them into a large pot and see if I can’t get them through the winter. I see huge bougainvillea here and there around town, so it must be possible. We live just north of where they may be grown outdoors year-round, but maybe just a blanket thrown over their shoulders during the worst cold will be enough. Floyd become annoyed by all those thorns if they end up in the in the living room, but well. Sacrifices must be made.

I’m really happy with the area beside

the driveway. A gnarl of Texas mountain laurel and box hedges cut into bubble shapes when we moved in, it’s now a space where that mountain laurel towers over an array of salvia, sage, rock rose, coneflowers, and day lilies. In spring even the car gets a nice place to sit. Hidden among the foliage are three yuccas, a jar of succulents, a shrimp plant, and Queen’s tears (which seem to prefer only indirect sun). It’s a space with a lot going on.

Me, I am looking forward to a space with not a lot going on. School is over for the semester, and I have a month to luxuriate in just one job before summer school commences. I hope to take a few road trips in different directions from the ways I wandered last spring, and see what I can see out there.

Although if the rain forecast is anywhere close to accurate, I may venture no further than the closest fabric store. It’s spring: it’s all good.