Today is Tuesday, August 74, 2015 and we are all about as fragile as grass shadows on a hot sidewalk. Not to mention that to find grass requires a trip to those places where people see fit to throw money into the ground for the absurd purpose of having a green lawn. No rain, no rain, no rain.

It’s been difficult to summon the wherewithal to put together a post at all. When you live in any kind of a challenging climate, you know the experience of feeling that your difficult season is just Never. Going. To. End. You look longingly at your “other” clothes, daydreaming, in my case, of sleeves and favorite sweaters and leggings and tall black boots that feel like bedroom slippers. I daydream about socks. Remember socks?

We should have seen it coming, of course; after the bountiful rain of spring and seeing a real rise in lake levels for the first time in years, we should have known the piper would show up demanding payment. My rain barrels are empty, drought has been re-established as a reality, my water bill is ridiculous – not because I do anything to keep the lawn alive, of course. I like to think I have more important things to do with water.

For one thing, small creatures need it. It is not unusual these days for me to tip the outside dog bowl in order to rescue a big red wasp that has dropped in for a drink and can’t climb up the stainless steel slope to escape. Red wasps have a fearsome reputation, but so far so good. They generally hump away on the grass trying to regain their breath before flying off. I hope I am building some good red wasp karma to make up for the fact that we have aggressively discouraged them from their favorite nest-building location under the eaves near the front door.

Some mornings the dog bowl is licked dry. I had been entertaining fantasies of sweet does loping into the yard for a drink, without paying much attention to the dearth of gnawn greenery. The only thing that’s being chewed up is a pot of aloe, and I have no idea who would want to eat that stuff. But a neighbor told me the other day he’d seen a coyote in our yard early one morning; undoubtedly that’s where the drinking water is going. I still leave the bowl full, but now I make sure to go out the door first when Travis wants his first front yard trip of the day. The neighborhood coyotes are highly unlikely to attack a full-grown human, especially at this time of year when there are no pups to protect.

All the birdbaths are filled with clean liquid 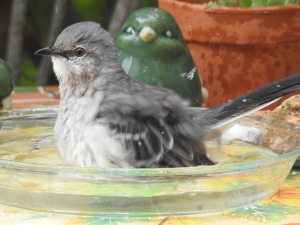 gold every day. At the moment their favorite daytime spa is a glass pie plate on a table outside the back door – perfect for my birdwatching requirements on days it’s too stupidly hot to sit outdoors. This young mockingbird took such an excited bath I needed to refill the dish. No remorse was evident.

At other times I’m sure the big lawn birdbaths are doing a brisk business; water levels diminish markedly on a daily basis, and there are always a few feathers floating about.

This year I was attentive

enough to hack the Gregg’s Mistflower to the ground in the sidewalk garden before leaving on vacation. G’s M is a prolific spreader and can be ripped up pretty aggressively, no fussbudget clipping required. I thought the timing would be right for migrating butterflies, and that turned out to be correct. I’m certainly not going to let those flowers wilt on their stalks when there are travelers to be fed! It wouldn’t be right. It wouldn’t be good manners.

Nearby is a shrub – new this year – that I’m also watering because it bears furry purple flowers very similar to the mistflower. Of course I can’t recall its name, but it’s going to be spectacular covered with butterflies. Stay tuned.

Everywhere else, it’s the worst of summer and we are all moving toward our wits’ end.

We know what to do with July, when the sun turns serious and heat settles in. We turn to cold food, cold drinks, ice-cold fruit and ice-cold beer, guiltless ice cream and tongue-staining sno-cones. Our world slows to near-halt status and no one expects anyone to really be on time for anything. We settle into the rhythm of daytimes indoors, leaving outdoor excursions for early morning and after sunset.

August we kind of get through. Every

available swimming pool is utilized to capacity and Barton Springs teems with swimmers. This year it was a good long while before the creeks in the greenbelt ran dry, so Floyd took Travis down for a swim at least once every weekend. Fortunately for Travis, his dog day care has an inground swimming pool; without that, there’d be no more fun times for the poor border collie who’s stuck in the house on all those boring stay-at-home days. Nothing to do but sulk about and dream of times when life used to be fun. Poor Travis, he would like me to say.

Usually by this point in October, though, the weather’s turned for good. Our days may be hot, but nights will be cool or even chilly. Usually we’ll have had some rain. But this year a few teasing instances of cool air evaporated before they truly took hold, and the pattern of hot days and hot nights stretches on. It’s a little wearing. We are starting to become cranky. It’s hard for me to see so many plants wilt, shrivel, and turn to dust.

Only the most madcap natives and well-

adapted plant species can stand it. I sneak some water to the rock roses because they keep my spirits up, generous in their flowering and in their self-seeding. How could I not reward such troupers?Early one morning, I thought this one made a lovely picture against a spineless prickly pear – a juxtaposition of soft and delicate against tough and deceptively treacherous – for despite their name, spineless prickly pears are not completely without defensive resources. I wouldn’t handle them without sturdy gloves.

All around us the greenbelt is a tinderbox:

accumulations of dead grasses and trees so parched it would only take one carelessly-tossed cigarette to start a tragedy. With so many people traipsing the many trails, it seems inevitable.

Last weekend I walked out one evening in my pajamas and smelled woodsmoke. It was acrid enough to hurt my eyes. Not good.

We are forbidden from having open fires of any kind, but it was the second weekend of the Austin City Limits Music Festival, and there are always many out of town visitors during such events. I called Floyd and we walked and drove around a slowly increasing radius of streets trying to locate the source. Our noses narrowed it down, but we saw neither flames nor outdoor revelry. Fortunately when we got back to the house, it was clear that something was being cooked on that fire. We were able to lock up and go to bed. But the threat of wildfire is a constant unwelcome presence.

And so August goes. Maybe the best we can hope for is that fire remains far from our parched woods. Up in the sky, maybe, where fire and vast spaces the color of fire belong. One of these nights that sky will bring us some relief.

EDIT: Since posting this, just to our east Bastrop county is experiencing wildfires once again – around 2000 acres are burning at the moment. There’s no rain in the forecast and we’re in for a few more hot, arid, windy days. We can only hope that the devastating wildfires of 2011 are not to be repeated; and as I said to Floyd this morning, if I call you from jail it will be because I’ve shot someone for throwing a cigarette out their vehicle window.

Not a jury in Texas would convict me.