And so it came to pass that some of us drove to West Texas for a few days’ escape from the usual.

I’d heard that it was very important to get to the McDonald Observatory some time before 2017 because something amazing about Saturn was happening. I mentioned this to my spouse, who thought it was a good idea. We are well-known for proceeding no further with good ideas, perhaps especially ones that involve seven hours of driving each way.

But a few days later I told my daughter about the Saturn thing and she went immediately to her computer. In a couple of minutes we had reserved two rooms at the Indian Lodge in Fort Davis and a handful of Observatory tickets for four adults and three children – my daughter’s two boys and, because I thought he might find a trip with his adored cousins a treat, my son’s eldest. Early on the appointed day we pointed two vehicles due west and set out.

Once you get past Johnson City, the scenery is not much more than barbed wire and a long rolling stretch to the sky. The appearance of low hills and mesas in the distance is positively inspirational, giving rise to conversation about the origins of the landscape – more volcanoes than you might think – and the scenery of classic westerns. Since the three cousins had to no one’s surprise opted to travel together in my daughter’s car, Floyd and I listened to David McCullough’s The Wright Brothers and waited for the hundreds of miles to go by.

The Indian Lodge in Fort Davis is a treasure of a hotel nestled in the hills between the town and the McDonald Observatory. Owned and managed by Texas Parks and Wildlife, it was originally built of pine and adobe in the 1930s by members of the Civilian Conservation Corps. It’s been updated, but still retains its pueblo-style rustic charm. And it was a perfect place for three boys to head out their respective doors right after breakfast and run all over the place until nightfall. Highly recommend.

One afternoon we drove down to the actual Fort Davis to immerse ourselves in 19th-century frontier existence and the never-ending excitement of American colonialism in action. I am always of at least two minds on any situation, and this was no exception. Here were the rough barracks with their tiny iron cots; the post office and commissary with its meager supply of canned goods and tobacco; the flagpole to which the bugle-call (now piped through rusty loudspeakers) would summon the soldiers at various points throughout the day.

And, closer to the suddenly rising rock cliffs, a sprinkling of relatively grand officers’ homes. Differences in rank clearly delineated in every possible way save the devastating effects of equalizers like typhus. 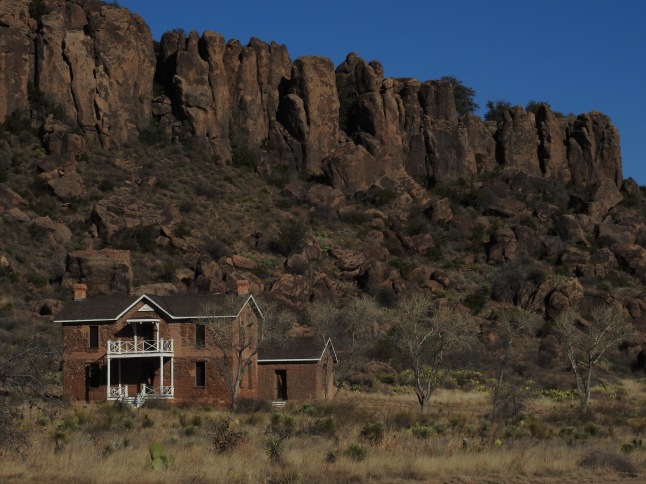 These dilapidated structures evoked all my childhood fascination with the “olden days,” as we so charmingly called them when we were in the mood for playing in long skirts made billowy by an older sister’s petticoats. I could almost hear the horses’ hooves and the clatter of wagon wheels up the dusty lane.

Another part of my mind was fully aware that this was a fort, established – we were told – to make the mail route safer. A tour of the fort’s hospital, with its operating table roughly the size of a coffee table but slightly taller, made the realities of fatal injuries and infections quite clear. Forts are places where fighting happens; anyone who’s ever seen a western knows that perfectly well. And we were fighting with people who had lived here for, oh, ten thousand years or so. Being of more than one mind often gives me a headache.

The day we caravanned over to Marfa was a lot more fun. 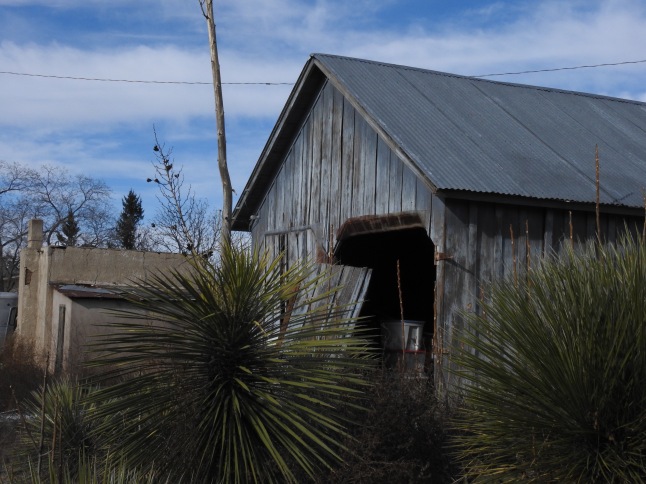 Marfa is a little West Texas town that’s also of two minds: the people who’ve lived in that hardscrabble landscape for generations, and the thriving ultra-hip-cool art scene. We cruised narrow streets among very old houses and, in the hillier places, saw ultramodern monied homes of concrete and glass. The restaurant where we had lunch had fake wood paneling and neon beer signs; I kept looking for the juke box and the cigarette machine.

In the center of town, old commercial buildings hearken back to a thriving oil and gas era; and there’s the beautiful old hotel that co-starred in the movie “Giant.” Everywhere there are whimsical art pieces large and small, past and present meeting in what seems to be an amiable companionship. The boys’ favorite part was the rock shop where we scored pounds of amazing treasures, a number of which now line the windowsill in my sewing/writing corner behind the couch.

For all my Saturn-related intentions, the trip to the McDonald Observatory was a bit of an anti-climax. It was a cloudy night to begin with, but as we crowded into the outdoor amphitheater for the introductory talk and laser show, the clouds drew off and we were treated – amazingly – to a clear view of the International Space Station crossing the full moon. Then we travelled from telescope to telescope, each one manned by a person whose rapt enthusiasm for what we were viewing was fun to watch. I saw Uranus, I saw distant clusters of “billions of stars,” I saw super close-ups of the valleys of the moon.

I didn’t see a thing of Saturn. It hadn’t occurred to me that sometimes an entire planet might not show up.

Later, back in Austin, my sweet spouse would hand me a gift box containing a lovely memento of the observatory visit: a paperweight I had admired that has the Milky Way inside it. The immensity of our own little solar system distilled to a handful of color and light.

I spent the month of January immersed in a 30-in-30 challenge I joined because a friend was doing one to raise funds for an online poetry journal: 30 poems in 30 days. It was a very good exercise, and I haven’t even begun to get to work on the raw material I mined; but one of the poems is about west Texas and I’ll just go ahead and leave it here for you.

It is a long day’s drive to get here.
Except for the wind, and the miles
of barbed wire, I think
this must be what it would be like
to land on the moon: these vast
distances, waterless, and then
the circling hills like worn down aunts –
no hint of the volcanic passions
of their youth.

Even seen from a hurtling car
there is a sense of the eternal:
this is all there will ever be:
dried grasses and leaning clumps
of prickly pear, broken shrubs
lined at the fences
awaiting their tumbleweed futures.
It is the essence of endlessness.

I imagine the people who came
to this place centuries ago, walking
slowly toward those tumbled
towers of stone must have felt
much as I do now:
infinity ahead, infinity behind,
no turning back.
No other anywhere to go.

One thought on “A Trip to West Texas”