You know how sometimes you make a plan that seems like an excellent idea at the time and then when the time comes it seems perfectly terrible? This is how I feel just about every time I formulate a scheme that involves air travel and car rental. Then I arrive at my destination and it turns out that this was an excellent idea after all.

It would be easy to blame Facebook. You poke around and see that your high school pals are laying the groundwork for your 45th reunion. People have put in time and effort! You should go! You still have family in Connecticut! It’ll be fun! So what if it’s the week before Thanksgiving? That’s good! No one will be traveling then.

I’m not sure air travel appeals to anyone over the age of five any more. No matter the reason for the journey, as far as I can tell the vast majority of us experience airports in a dour haze of sheer survival and please don’t cough on me. When I am Queen of the Universe one of my first tasks will be to expedite the development of a transporter such as they have on Star Trek.

In any event, I arrived. My first adjustment is always to the miniature scale of my native state. It always feels as if I’ve stepped into a toy train world with little towns and white churches on the green. Fortunately the weather was clear and rather mild for November. I pointed the rental car in a generally northwesterly direction and headed for the hills.

Because my niece Chris has graced us with her presence a few times here in Austin, I had summoned the temerity to ask if I could impose upon her for a couple of nights. I was really looking forward to seeing her, and spending time in her wonderful old house.

I’ve lived in a couple of “old” houses in Austin; Chris’s house was old long before they were built. She has the kind of house you’re glad not to have to heat in a rough northwest Connecticut winter. Or go around dusting at any time of the year. If this were my house it would be festooned with Addams Family style cobwebs, I am sure.

Right off the foyer, down a couple of steps, is a cosy little nook of a powder room that would have impelled me to buy this house without ever stepping foot in the rest of it:

My house’s most interesting architectural feature is the pantry that measures 1.5 feet wide and 4 feet deep. Speaking of pantries, it is only suitable that Chris would have a worthy one; she is a very talented baker and all-round excellent cook.

I’ll confess right off the bat, I did not visit my entire Connecticut family (Sorry, Katherine and Jac, will make it up to you!). Taking a page out of my best friend Mary’s handbook, Chris and I tooled around for a couple of days without making a single plan or commitment to anyone, basically eating our way around the countryside. My shame knows practically no bounds.

Because she has worked the Norfolk Farmers’ Market for the past several years, selling treats from a bakery where she works when needed, Chris has her finger on the pulse of many artisanal producers of yummy consumables. One day we rode out to Goshen to visit a very interesting chocolate factory. 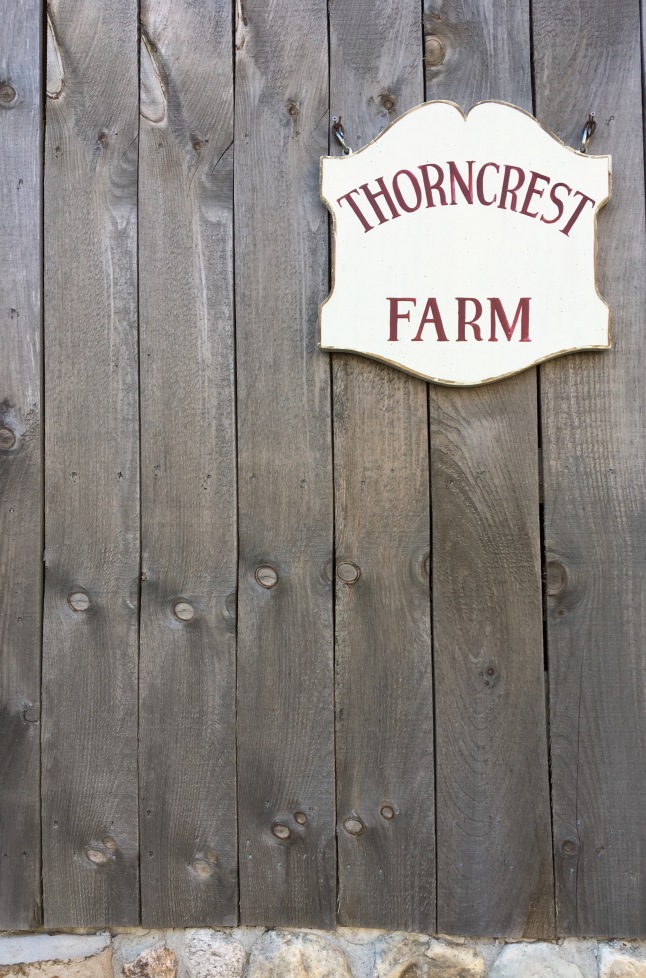 Now I am against the exploitation and slaughter of animals of any kind, as you well know. But as you also know, I have moral lapses that are Grand Canyonesque in their scale. Why be halfway bad, especially if chocolate is the road we are taking to perdition?

Thorncrest Farm is not in the business of producing cows to eat. They feed beautiful cows and let them make something for us to eat. Attached to a minuscule shop is a long open barn where beautiful cows lay about, chewing as cows do. Near the door was a new baby: 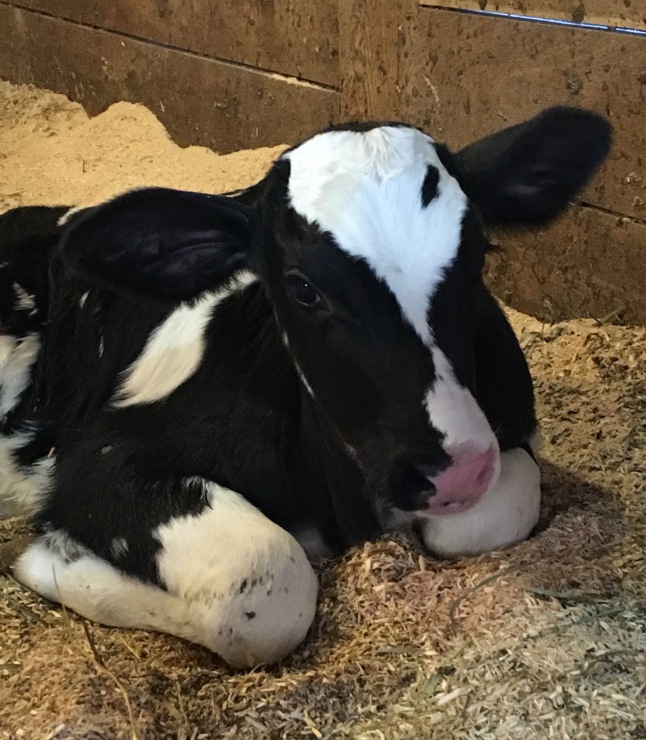 It is really not nice to exploit cows. But this was no run-of-the-mill factory farm. It smelled like hay and sawdust and sweet cow exhalations.

Beyond the open door lie acres of rolling green grass and thick stands of trees. In the shop, various milk products bearing the names of the cows who were responsible for them. And some seriously outrageously fabulous chocolates. We picked out a dozen for Chris’s sister Kim, whose “Beauty and the Beast” we were going to see that night (I’ll tell you, my eldest niece made a wonderful teapot); sampled dark chocolate covered pumpkin-pie truffles; and filled me up with packages of caramels and dark chocolate bark studded with cranberries, walnuts, and other crunchy things.

I rather regret passing on the solid chocolate turkeys, but I’d travelled “carry on” and would have had to buy an extra seat for a treat that size. 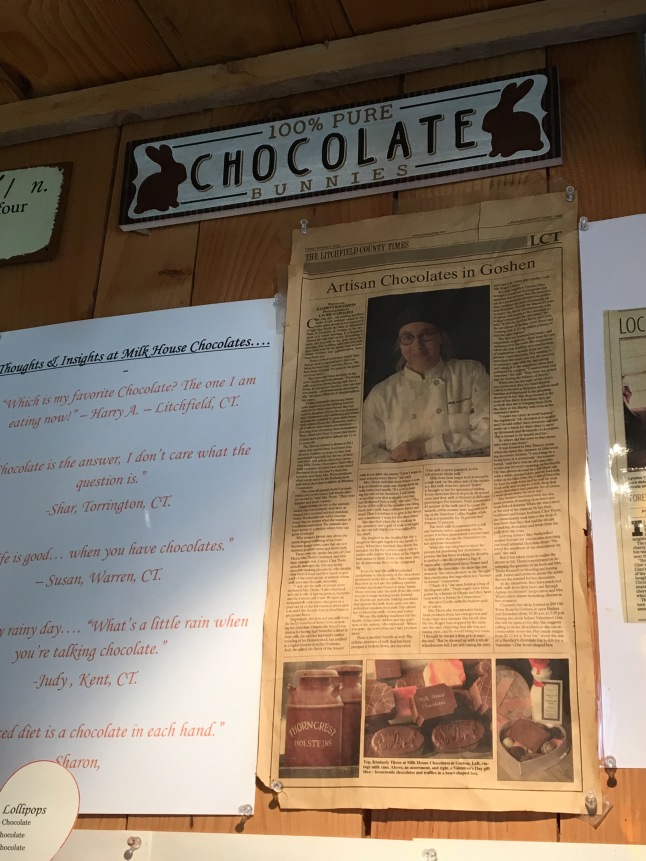 Being as it was past the halfway point through November, I didn’t know if I could expect much New England Fall Color privilege. Fortunately, there was plenty of that to take in as I took my walks through Chris’s neighborhood on chilly mornings. 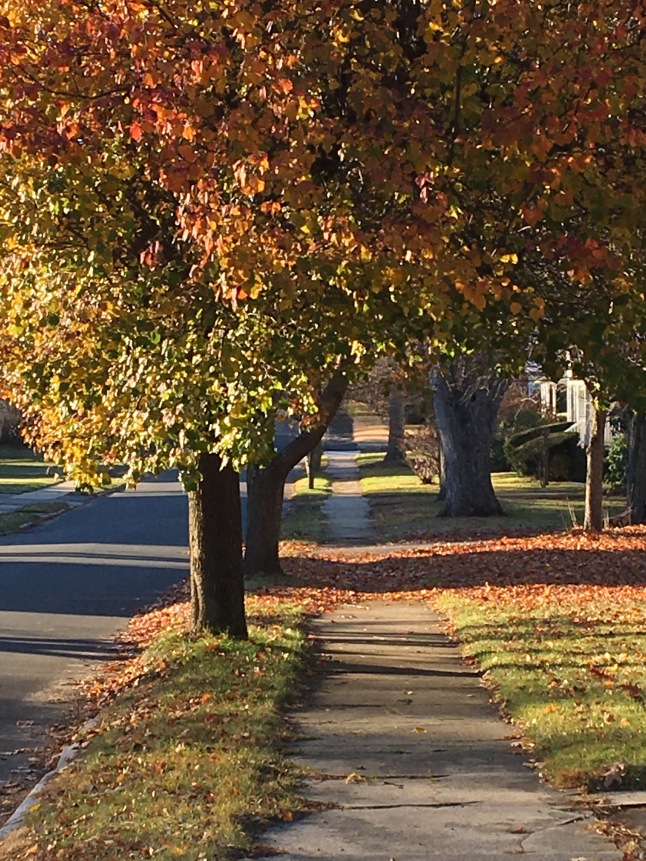 The town of Winsted is built on rows of rock shelves that rise precipitously up from the river where old mills are now art spaces or apartment buildings, or empty. The most recent economic downturn hasn’t been particularly kind up here. It seems there’s a strict divide between the area’s blue collar history and the fantastic wealth of some residents, whose stately mansions and rolling acres say, hedge funds.

Chris’s neighborhood belonged to the 19th-century gentry. If I remember right, her house was built by one of the most prominent local clock makers. Now this part of town is a charming mix of the well-preserved, the poorly reimagined, and homes that convey the sense that the same family has lived on this property for generations. 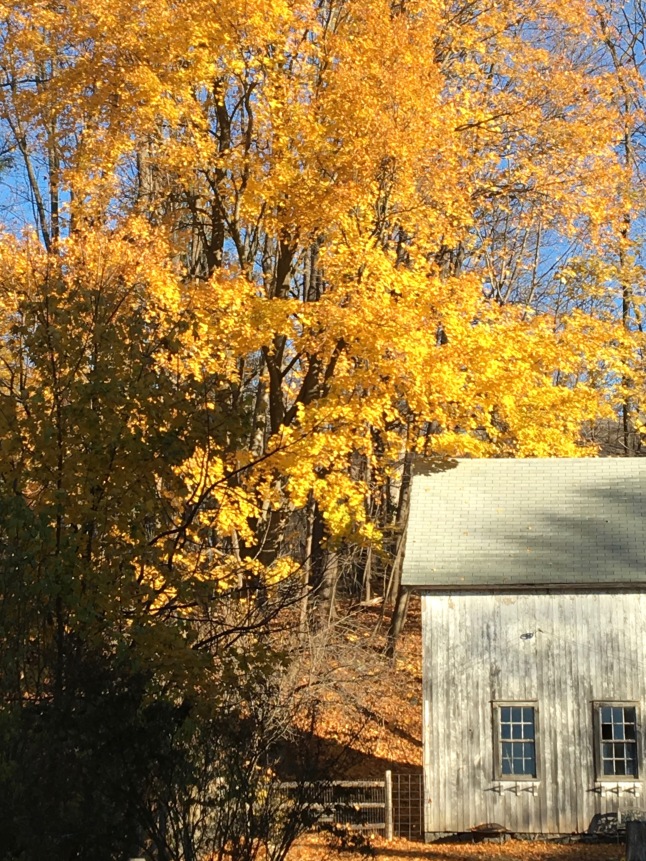 I had to do a whole lot of walking on this trip, since Austin is not exactly the Italian food capital of the world, much to my dismay. And just as you can probably get better Mexican food at Austin’s airport than at any restaurant in Connecticut, Connecticut’s pizza and pasta games are in a different category from anything I can find in Austin. So, because such a situation must be taken full advantage of, I had a lot of calories to burn. We saw Chris’s friends down at the local Italian place, Monaco’s; another night we ate at a more modern trattoria in Avon where the olives were so delectable we asked our waitress for seconds and she brought us each a pint container filled to the brim with green and black olives in fruity, lemony olive oil. And let’s not mention the bread except to say that if I lived up there I would not be the size I am for long. Ten minutes, maybe.

On Saturday morning we decided to do our walking in a different state. Off to Stockbridge, Mass. for an immersion in touristy shops – one of our favorite pastimes. Right after lunch, that is.

I thought there should be the clip-clop of horses’ hooves and the squeak of wagon wheels outside the wavy glass windows. As it was there were merely delicious food and excellent coffee in a warm dining room decorated with a hundred china tea pots, and how fine such things are on a chilly day.

The best I can say about the rest of that Saturday is that I didn’t spend way, way too much money. That evening I managed to find my way through some pretty sketchy rain-soaked Hartford streets to find the hotel where my high school classmates were assembling. We ate and drank and reminisced and caught up and danced to Van Morrison, as people in their 60s are wont to do.

On Sunday morning I awoke precisely twenty minutes before my flight was scheduled to depart. In such circumstances it is best to be a good sport with oneself, purchase the necessary ticket for a later hour, fortify the aging body with an excellent breakfast, and spend the hours before the rescheduled flight taking a tour of the home state. Since the onset of the rain, the weather had turned cold and windy.

So I drove to the beach. The wind was doing its best to shove the rain somewhere else. 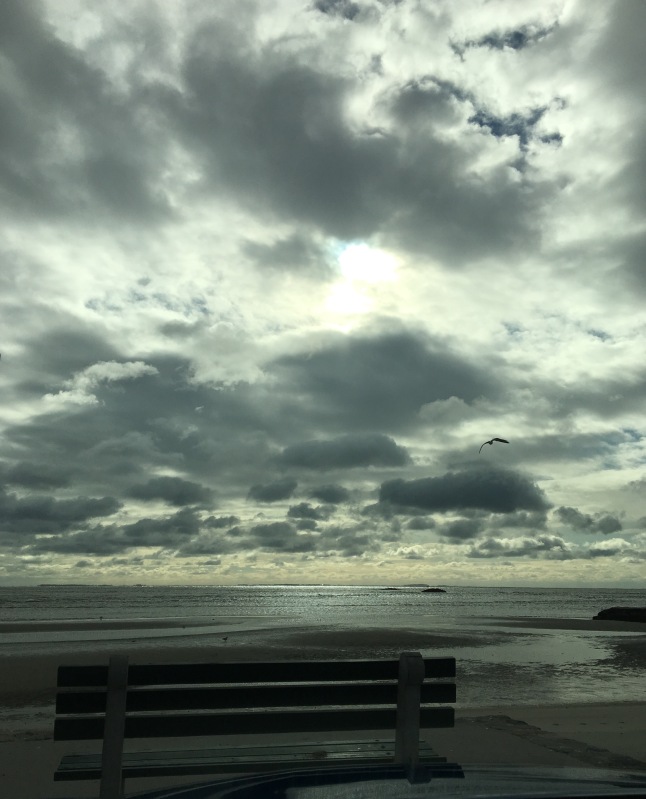 I walked maybe a hundred yards in the sand before the cold defeated me. Hatless, coatless, gloveless, I had to shoot from the inside of the car, heater on full blast.

The view above is as familiar to me as the face I see in the mirror every morning. It is the town beach across from the cottage my father built many years ago. Members of my family have a way of heading to that beach as if the house hadn’t been sold almost fifty years ago. Some of them have even been known to knock on the door and take a tour. I don’t know what the family who lives there must think of us, but clearly we have no concept of letting go.

Within spitting distance of that jetty I invited myself to my sister Judy’s swimming class when I was too little to be signed up; I spent the long summer before Kindergarten sick with tonsillitis; I built sand castles and dug moats and caught crabs with pieces of hot dog tied to a string; I fell in love and experimented with mood-altering substances and was broken up with. For most of my life there was no keeping me out of any body of water, no matter what the weather.

On this day the beach was deserted and punishingly cold for someone who currently needs gloves in the house. I sat for a while, wishing I’d brought coffee, then drove around town for a bit. On Old Main Street I stopped at a cemetery that sits beside a house built in the early 1600s. If this doesn’t look like autumn in New England, well, I don’t know what would.

Even as a little girl I loved walking through this cemetery and reading the headstones. My sister Katherine and I  were always amused by one in particular, that tells the story of a citizen who went into church one morning as usual and ended up being carried out in a box. It seemed to us like an express ticket to Heaven, and we wondered if we could ever choreograph such a handy ending.

When I’d had my fill of reminiscing, I took the long way north, impressed by how little has changed over the years, and as usual, daydreamed about what it would look like to move back. Then boarded a plane for Chicago and on to Austin, where my dear spouse and our good dog would be waiting to pick me up.