Just in case you are looking for something to do – midst of winter in our hemisphere, and all the yard work too tedious to contemplate – this is how I made my most recent piece of yard art.

First, of course, you get a length of steel pipe weighing around 56 pounds, prime it, paint it with metallic silver, and let it dry a day or two. Then place it on a towel (for easy dragging), manipulate it onto a dolly, and bring it to the living room because the garage is too cold for paint.

And because everybody needs a length of pipe in the living room.

What I had in mind was derived from a “four seasons” mandala I’d seen online. It was cool with the artist to print it up and color it, so I printed it with the idea of tracing its outline and copying its main theme.

Because my first attempt did not work because of upside-down snow, I thought the round pipe would lend itself well to the four seasons. Rather than having the trees ring a circle, they would ring the pipe’s circumference. Obviously you can use whatever material you like; I am about to switch over to 4″ square fir in 48″ lengths that will be a whole lot easier to move all about the place.

Step One: I used a dry-erase marker to put a dot on the top rim of the pipe, dividing the circle into four sections. I would use those dots to place the midline of each tree – none of this with extreme exactitude. I just wanted rough quarters.

Step Two: I thought about where I wanted my trees to stand, making some allowance for the fact that this pipe will have to be set down into the ground a bit, and might have a plant sprouting out of the top. Once I outlined one tree, I had a good sense of the plane on which all the trees would rest. It occurred to me that the branches and roots would intertwine. This first outline doesn’t have to be anything close to perfect! A perfect tree would be the kind you would generate on your computer. Cool if that’s your thing, but not the look I’m after.

Can you see the little dot in the center bottom of the tree on the left? Throughout the project I used a pretty simple technique to place things on a plane. See Step Three.

Step Three: how to mark one plane on a round pipe and not paint a design that lists so badly it makes people seasick. Using a tape measure, I would measure down a certain distance from the top of the pipe and place a dot of dry-erase marker where I wanted the plane to be. For the four trees, it was a dot more or less 13″ right below the dot I’d placed on the pipe rim. Later, when I needed to encircle the pipe for a border, I placed dots about an inch below the trees, a few inches apart on the desired plane. The dry-erase marker meant I could wipe the dots off after I’d painted.

That blue thing is the handiest curve-maker possible. I’ve seen them at craft and office supply stores. Floyd gave me this one. He has many things for doing all kinds of operations on pipe, including making beveled edges and tapping into pipes that are carrying natural gas under pressure. Never mind, I don’t want to think about that.

For the border, I traced the complete circumference with a metallic silver marker – very close to the color of the pipe. You can just see that line on the left of the blue rubbery thing.

But back to the trees:

Step four: I colored in the thin branches with a fine-tipped paint marker, then brushed on the black  Rust-Oleum for the bigger sections. Since I have zero ability to paint a vertical surface that isn’t a wall, I lay the pipe on the couch and more or less straddled it. We work with what we have.

Of course, Marco supervised every step of the way.

Step Five or so: Once all four trees were painted on, the fun stuff could really get under way. Stealing from the online four seasons mandala, I put little flowers in among pale green leaves to denote spring, darker greens for summer, confetti for autumn, and snow for winter. Here, autumn, winter, and spring hold hands.

It’s time to release your inner doodler, trusting that making the same shape over and over is going to work out wonderfully. All of this doodling is done one little leaf at a time, with lots of getting up and walking around and taking Travis out and eating lunch and listening to Louise Penny’s Inspector Gamache series on Audible.

This last has been very important since as you undoubtedly know those novels take place in Three Pines, a village in Quebec so small it does not appear on any map. Its characters are so quirky, I draw permission to loosen up directly from them. Floyd had to remind me more than once it is currently 30 below zero Fahrenheit in the place where Three Pines would be if it were real. Other than that I’d be packing up the car hoping to become hopelessly lost just outside of Montreal, which is how you find yourself in Three Pines.

Just like Three Pines, not one part of a yard art project has to look real! And plus on top of that, you can always paint over it!

Once the trees were done, I added an inspirational quote and a border. 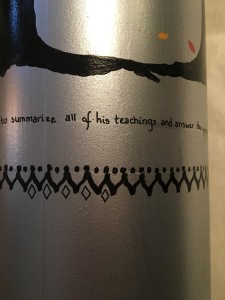 To determine my “font size,” I cut a strip of paper the length of my pipe’s circumference and did two practice runs. It would be just like me to run out of space at the end, so this step seemed worth taking. The first draft was way too small, so I increased the font size a bit:

Then I felt like adding seasonal mandalas beneath the trees. This necessitated that measuring down from the rim thing, to make a dot where I wanted the center of the circles to reside. I made a couple of circle patterns out of a file folder and poked a tiny hole in the center of each. 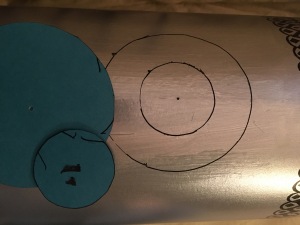 See what a mess those circles are? Do not become snagged by such details. All will be painted over or touched up as needed. The dot in the middle was made when I measured down from the top, and the cardboard circles would have their little hole placed right over that dot so I could trace them. Cake walk.

I didn’t give too much thought to the seasonal mandalas, but ended up with more or less appropriate flora. Daisy, sunflower, chrysanthemum, snowflake. Here’s the daisy-ish one: 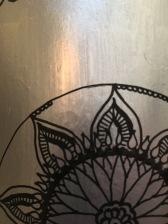 I just add one more round of detail whenever I feel like it. It occurred to me that like many adults I have a collection of grown-up coloring books, many of which have elaborate designs you can mine for ideas about where the hell to go next. Take one of those larger outside petals, draw a line inside each, draw another line, connect two of the lines with teeny-tiny slightly curved lines – it’s an obsessive’s dream, I’m tellin’ ya. Here’s where all your years of doodling come in.

When it came down to the winter design, I made a few futile attempts to draw accurately six-pointed snowflakes, then gave up and went the easy way. To emphasize the snow impression, I added white dots. All the other circle designs are simply black ink. I asked my daughter, for whom this piece is intended, whether she wanted a spot of color in the other seasonal circles and she said no, she preferred the simplicity of just the black. It really makes the snow stand out.

Here are the other seasons: