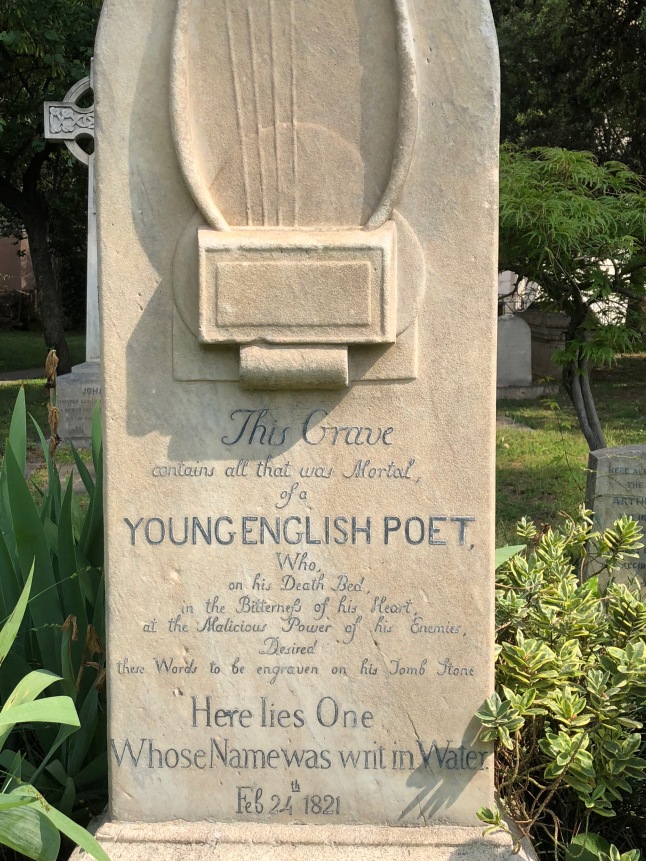 In college I majored in the British Romantics, Wordsworth to Yeats mainly. My job as a TA was to teach people how to read poetry aloud.

No way we weren’t going to stop at the Protestant Cemetery on our metro trip back from Ostia Antica.Rome’s Non-Catholic Cemetery, often referred to as the Protestant Cemetery although we saw graves alluding to a number of non-Catholic religions, is located in the Testaccio area of Rome and would have been quite a walk from our apartment. So stopping by on our return trip from Ostia Antica seemed the best plan, although I was a little worried about finding the entrance in time.

You’d think it would be easy to locate a place across the street from the metro station and right next to a good-sized pyramid,

but – and I could be totally wrong here – Mary and I dealt with a number of maps that weren’t, um, as informative as we would have liked. Or to scale. Or with all the street names on them, and street names can be elusive on the actual real-life streets of Rome.

After only a few false starts we managed to find our way and ended up being very glad that Mary didn’t give in to my discouragement. It is a beautiful cemetery.

As I have mentioned before, I come by a love of cemeteries honestly. When I was a kid all we had to do was cross the street to the Vinci’s yard, walk straight back, climb over the chain link fence, and we were in a cemetery with headstones that went all the way back to the 1600s. Center Cemetery is a place where we spent an inordinate amount of time. We liked reading headstones, admiring fancy ones and feeling appropriately sad at children’s graves. It was a good shortcut from Main Street to Elm on the walk home from school. It was where you went to learn to ride a two-wheeler down a “hill.” It was, appropriately enough, one of the places where you practiced smoking cigarettes and other things.

John Keats, for example, obviously wanted a taste of his bitterness carved in stone. The embodiment of a romantic poet, he suffered great pangs of love and loss and died at 26 of tuberculosis. There’d been some negative press, which weighed heavily on him; but Keats had never been robust in health. (It was Byron who referred to Keats’s poems as “piss-a-bed poetry,” which wasn’t very nice; but what can you expect from a charmer like Byron who would repay one man’s hospitality by seducing not one but two of his teenage daughters?)

Keats is buried alongside Joseph Severn, a young painter who spent those last months with him alongside the Spanish Steps. There is a little window in the cemetery wall through which you can see the two headstones side by side: a place of pilgrimage for so many lovers of poetry and romanticism.

I don’t know who erected this commemorative stone, but I’m sure to come across it in my post-visit reading.

Mary and I took our time wandering through this sloping shaded peaceful place. There are headstones I know to be famous, like this one: 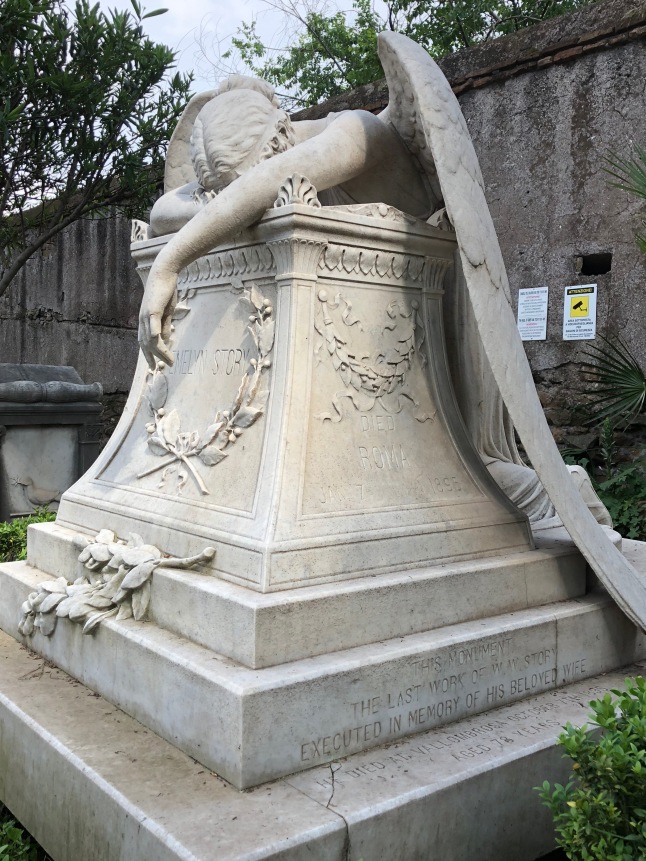 This is Angel of Grief, the last major work of sculptor William Wetmore Story for the grave of his wife Emelyn. He died the year after she did. His title for the piece was The Angel of Grief Weeping Over the Dismantled Altar of Life. I can’t imagine a single word to add to the topic of mourning after that.

Other statuary commemorates the deceased individual: 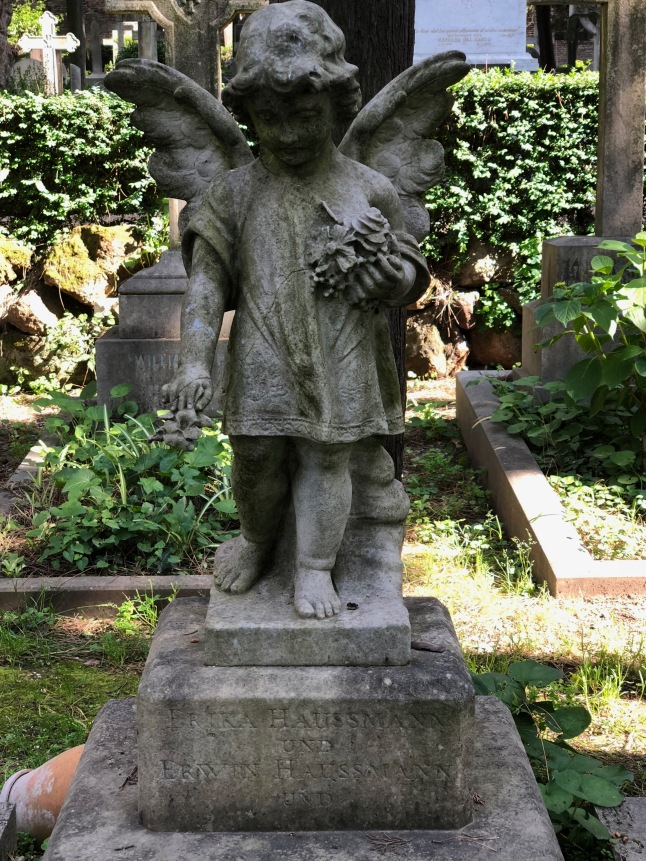 As you might imagine, this is a cemetery in which you could spend days reading headstones and never get through them all. It’s so peaceful that it’s easy to forget that you’re a stone’s throw from a very raucous set of intersections. Frantic rush of life right alongside several centuries of permanent silence: Rome in a nutshell. 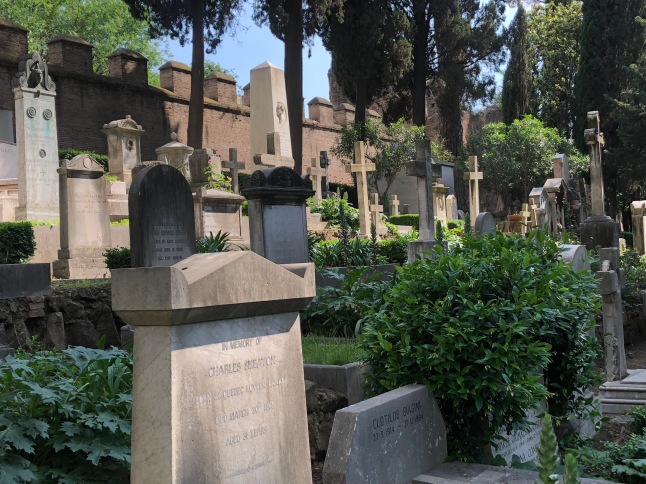 There are flowers, of course:

And feline residents who appear to find it a very good place to live:

One attraction of the Non-Catholic Cemetery is its apparent high proportion of residents who were artists. At least one headstone belongs to an architect and spouse:

Another, in keeping with so much of what we saw in Rome,  is adorned with a simple mosaic: 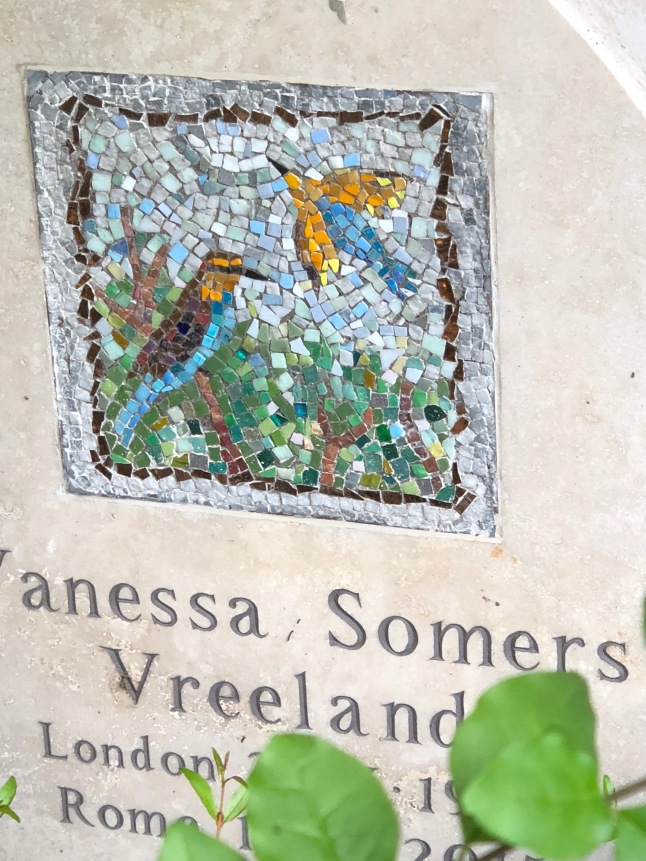 It seemed to me there were many non-natives in this Italian cemetery, people from all over the world who loved Italy and particularly loved Rome. The poet Percy Shelley (who, I’ve been told, made a rather rock-star half of the Shelley-Byron group ((they were prone to ride into town on an elephant and ride out with all the womenfolk))) wrote, “It might make one in love with death, to think that one should be buried in so sweet a place.” This was not long before he drowned in a sailing accident in a storm – quite a romantic tale in itself: The Death of Percy Shelley.

And of course he is buried here too, although we ran out of time before we could find his grave.

I found one statue that said as much to me about the grieving survivors as any monument in the entire cemetery, without a single word or carved epitaph:

I harbor zero romantic notions about what happens to us after death; I am missing the only piece of data that can clarify that picture. I have ridiculously romantic notions of life, however; and art is the key that unlocks so many of them for me.

I can only begin and end with Keats who, by the time of this poem’s writing, must have begun to sense that his days of quiet breathing would end as his mother’s had when he was just fourteen.

A thing of beauty is a joy for ever:
Its loveliness increases; it will never
Pass into nothingness; but still will keep
A bower quiet for us, and a sleep
Full of sweet dreams, and health, and quiet breathing.
From Endymion: A Poetic Romance

(As a postscript I can’t help but think of the commitment Bill and Melinda Gates have shown in their funding of tuberculosis research. I went to school with kids who’d suffered illnesses like TB and polio, and believe that if there are saints they walk among us trying to make this world a safer place in which more children might reach adulthood. How privileged we are to take our long life-spans for granted!)