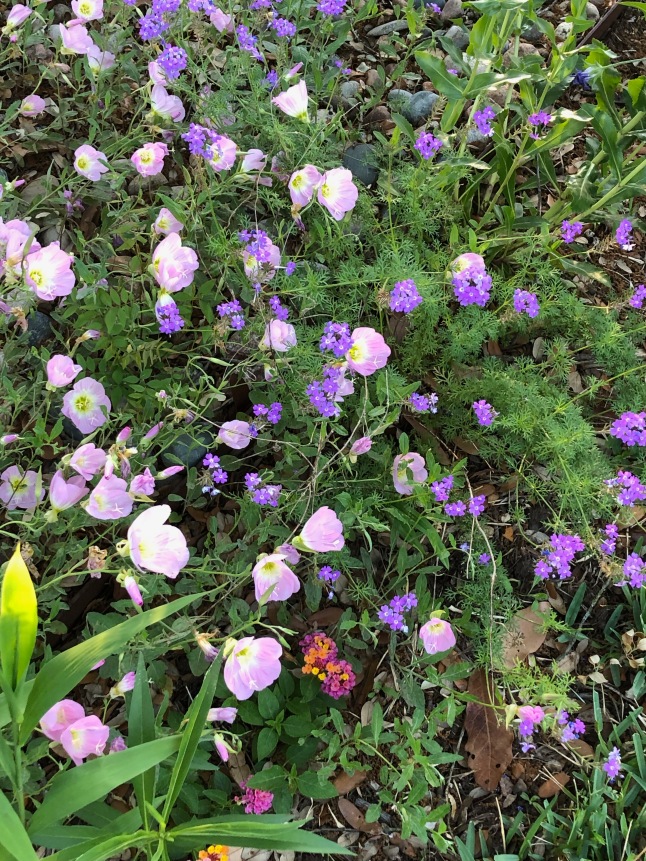 It’s the second week of May and we’ve had rain and expect more, and I’m looking at my last two days of being a teacher. Lucky there are so many flowers to distract me.

The grandmother tree (aka a privet of some sort) has taken full advantage of the facts that the potted plants living in its shade are watered regularly and I am a rather unruly hose-wielder. Even now that its flowers are on the wane, the entire yard is filled with that pungent scent of everyone’s grandmother’s side yard. 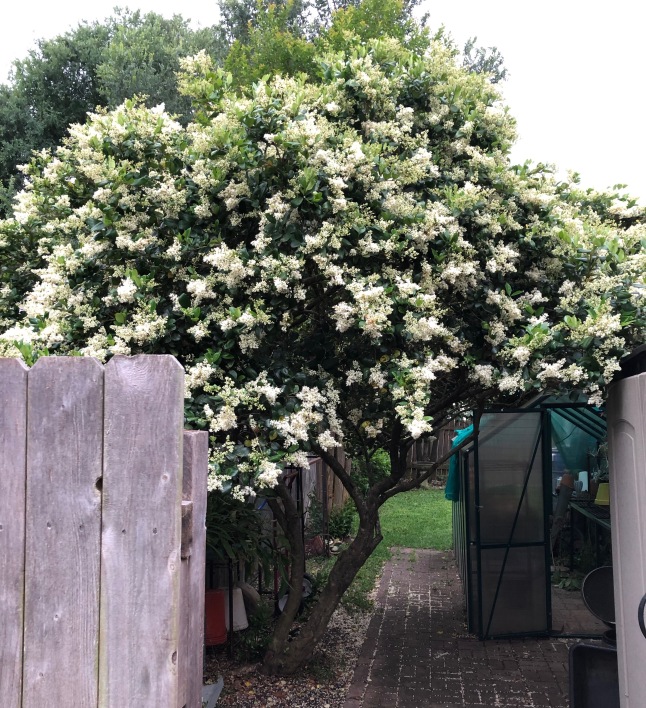 [Insert audible bee buzz and flutter of dozens of black and orange butterfly wings. Some of the latter were actually delivered by a neighborhood quartet of sisters who had raised them from caterpillars and wanted to release them in a yard full of flowers. What a treat!]

Between rainstorms, we’ve had a range of days – from five pounds of pollen per cubic foot to absolute halcyon blue skies cool breezes golden sunlight. Every day the sidewalk garden has something new. From 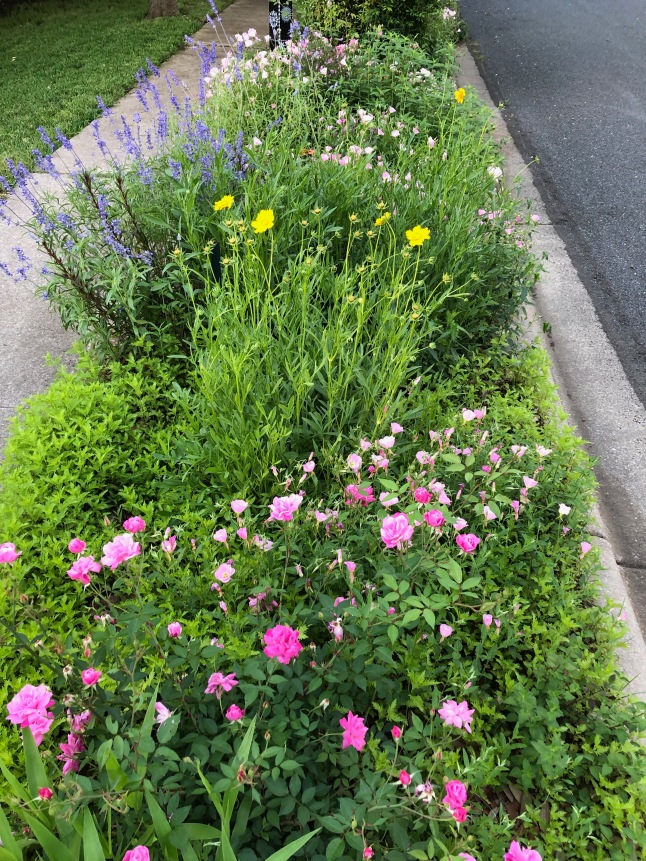 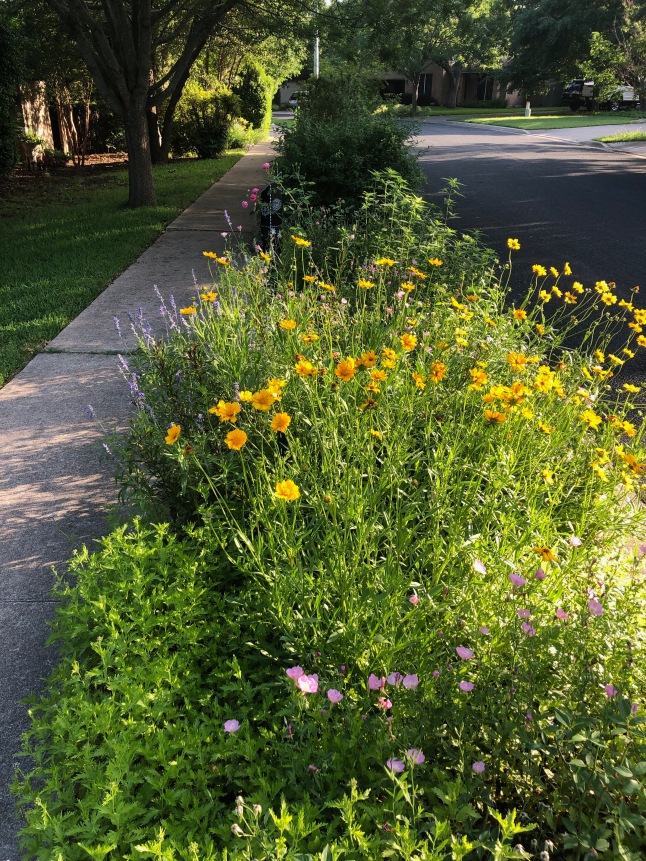 and so on down the walk. This bed is now one of only two in truly full sun, so much has the canopy increased in the nine years we’ve had this garden. Soon I’ll be back on the hunt for interesting shade varieties, just like in the days when pecan trees arched over my previous two yards. At least the bed at the far end, down by the light pole, has enough sun for later flower-producers like Esperanza, Pride of Barbados, and duranta – all of which are coming along nicely.

In the midst of all this I’ve survived another birthday, and as always Floyd made me the most perfect gift ever. We’d had a few days of the most ferocious winds I could remember, and one night my crown of thorns was blown over. This was fine in a way, as it was a brutal task to move that thing at the onset of cold weather, and its pot was so firmly lodged in the steel plant stand, complete destruction was the only way it was ever going to be removed.

Plus, a plant needs to have its roots shaken up every now and then.

With apologies for the disaster area that is my art corner, here is the planter (border collie for scale although Travis is large for a border collie): 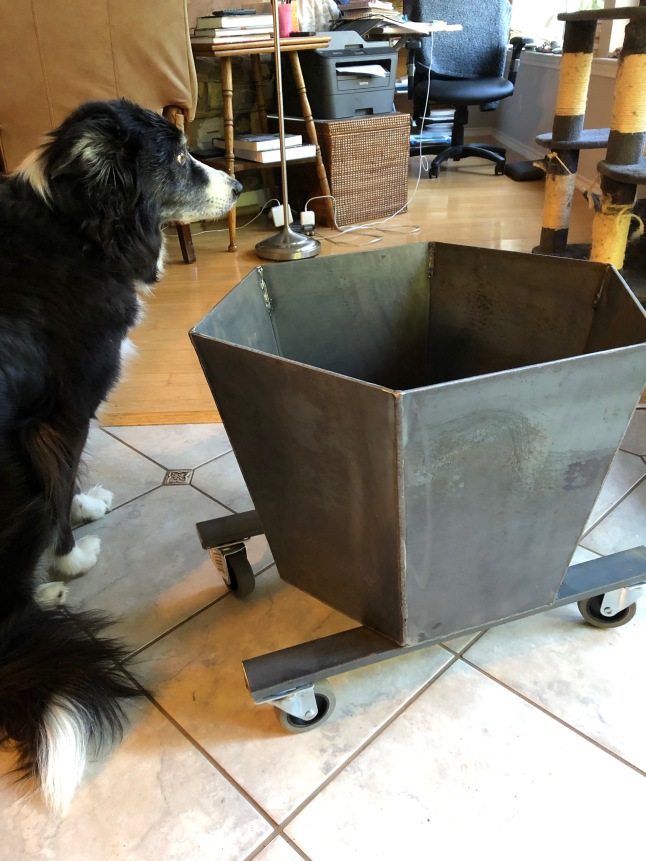 Floyd took it back to the shop to reconfigure the wheels, and in the meantime I considered my approach. Since I have failed to summon the discipline to get back to welding lessons, I ordered a couple of bags of hot glue sticks, “Gorilla” variety. I wanted to something along the lines of a planter I’d experimented on a while ago – 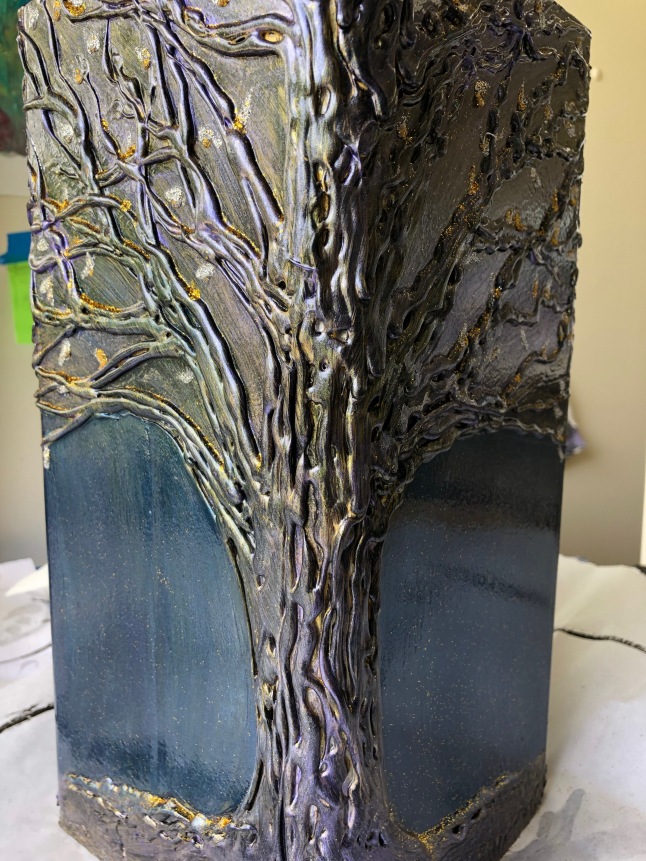 Since nearly any job Floyd tackles demands that he create something new to make the job easier, he made me a great device that allowed the new planter to be on its side as I worked on it. Basically he cut a thick piece of plywood to fit the hexagonal planter perfectly, with a hole through the center for a long steel rod. Placed on two pipe stands (with a few more mechanicals for ease and safety), I could adjust the height and rotate the planter as I worked.

In any event, the poor battered crown of thorns was soon hoisted into place. 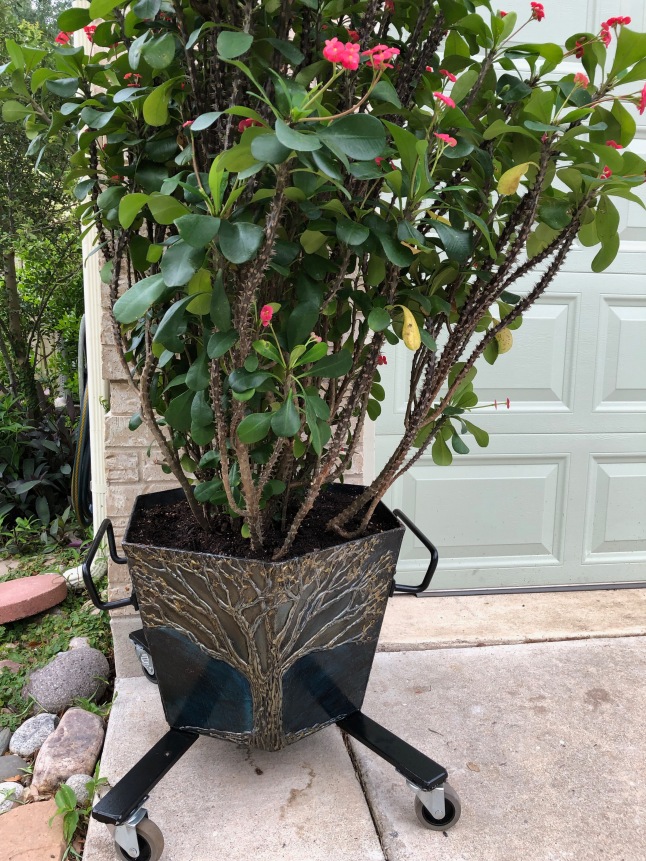 I should add that the planter is designed specifically to fit easily and firmly onto the dolly, when greenhouse time returns.

These are the kind of things I have dreamed of making during my impending retirement.  (As I write this, that means day after tomorrow yikes.)

In their third spring, the poppies at the end of the driveway were just delightful this year! 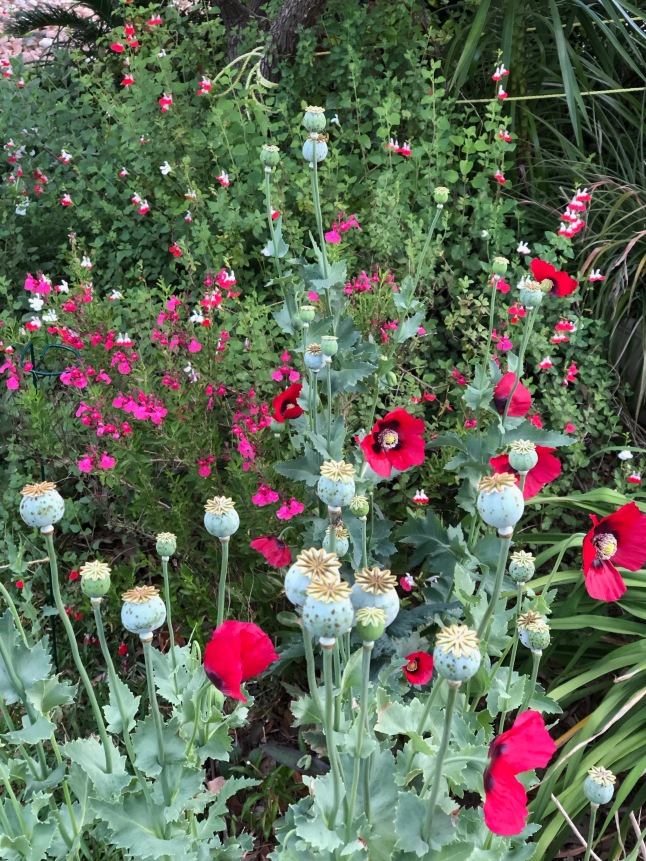 All the pinks and reds of the poppies, salvia, knockout roses, and Mexican primroses made that part of the yard a joy to come home to.

Meanwhile, the mutabilis rose hurled itself over the back fence and gifted the neighbors – who, unlike some miserable people in our old neighborhood, are sensible enough to enjoy all the flowers they don’t have to care for. Some peoples’ amaryllis have bloomed already; not mine. 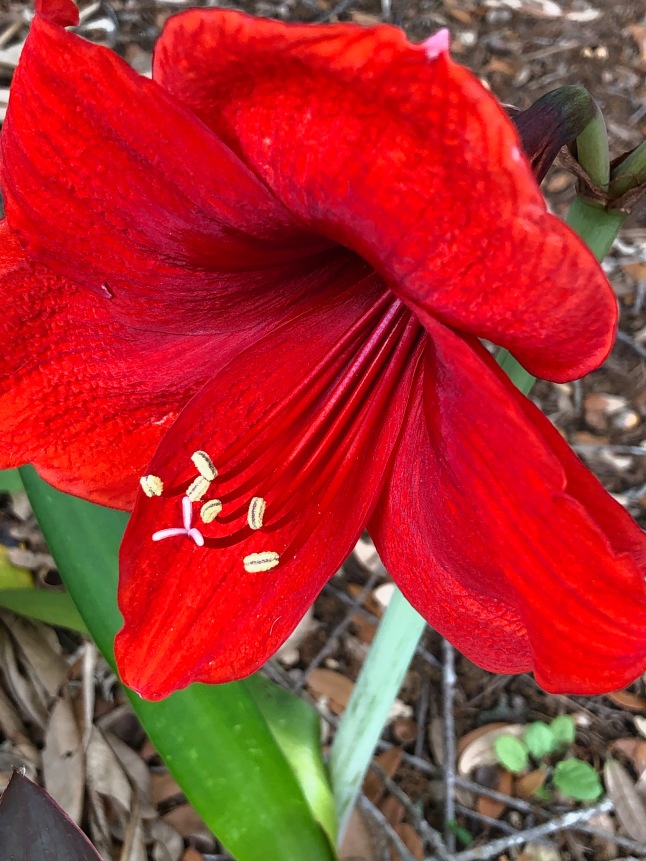 I do have some hens and chickens and Lucy Sparkletoes, tho. 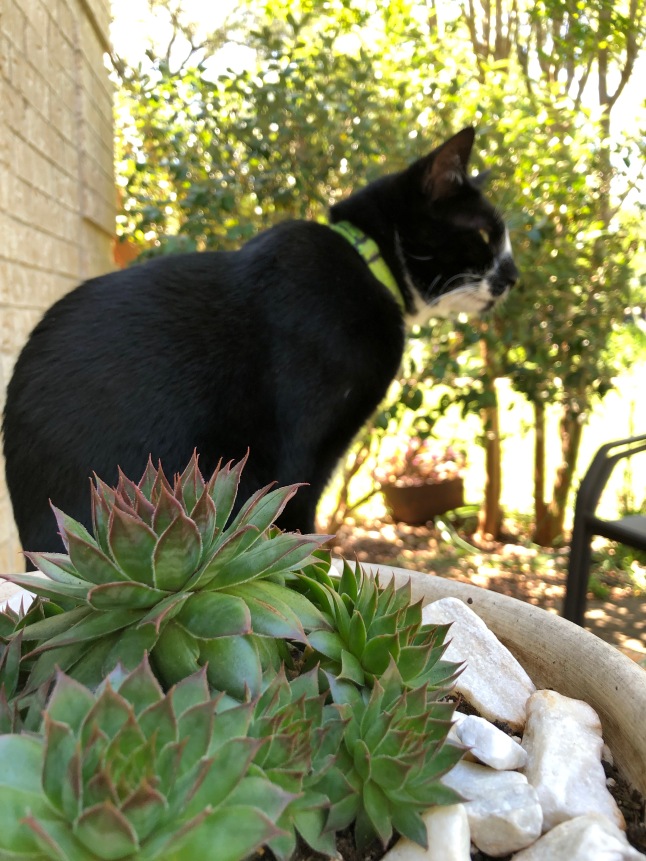 She is probably mildly annoyed that my focus is on the plants. Nevertheless, Lucy manages to be a good sport, helping my creative endeavors as I continue the struggle to learn to paint things in acrylic that appear three-dimensional. Lucy is such a wonderful helper! 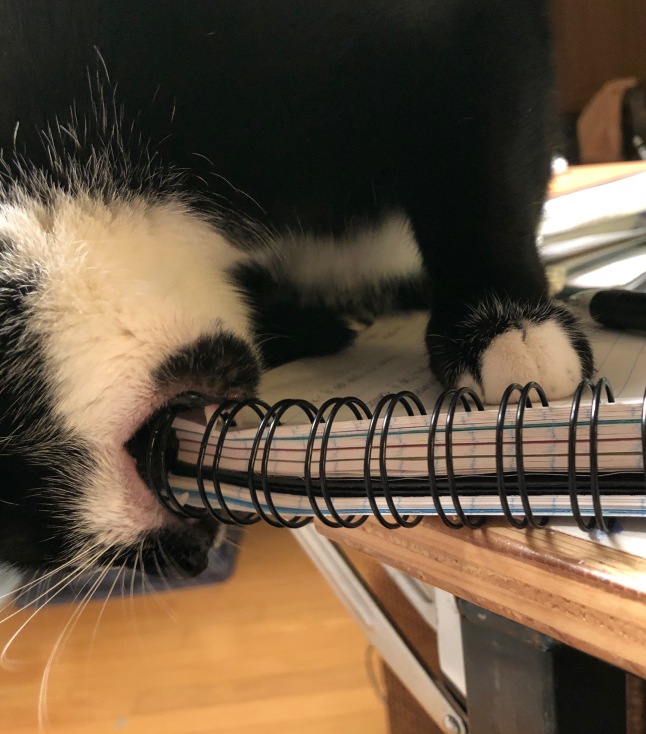 Or a great holder of grudges, I’m never sure which.

On a recent morning the light was just beautiful as Travis and I took the first Designated Potty Walk of the day. I knew no photograph of mine would do it justice, but I couldn’t resist shooting this charming area alongside the road, that even has a “Welcome” sign inviting anyone to stop and rest a minute. 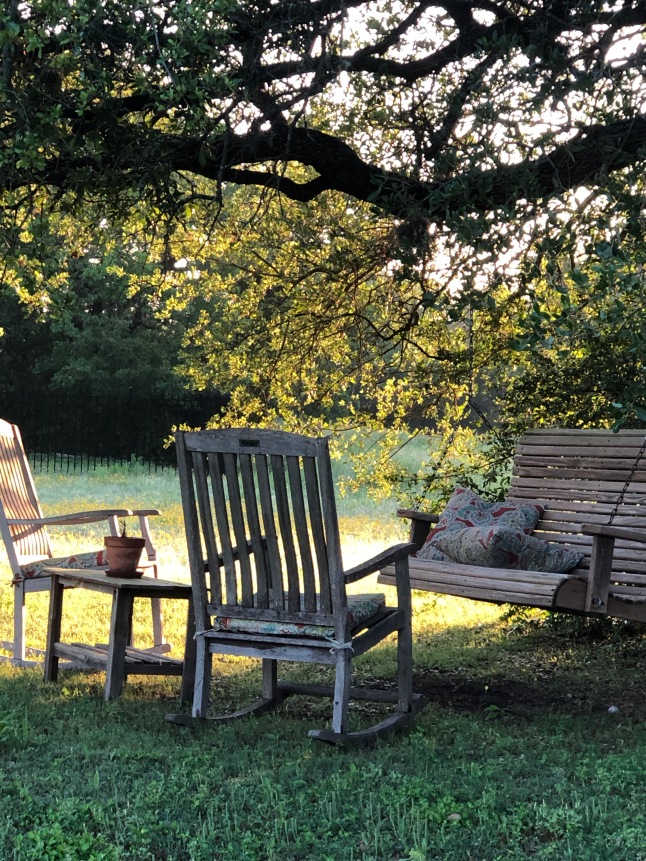 Behind that outdoor living room, wildflowers.

Wildflowers. I wish every one of you could have been in central Texas for this wildflower season. First the dark bluebonnets, then the intensely orange Castilleja indivisa paintbrushes, the pink Mexican primroses, and then the Gaillardia commonly known as Indian blanket but I don’t know if indigenous people would prefer a name change. We are still enjoying acre after acre, mile after mile of 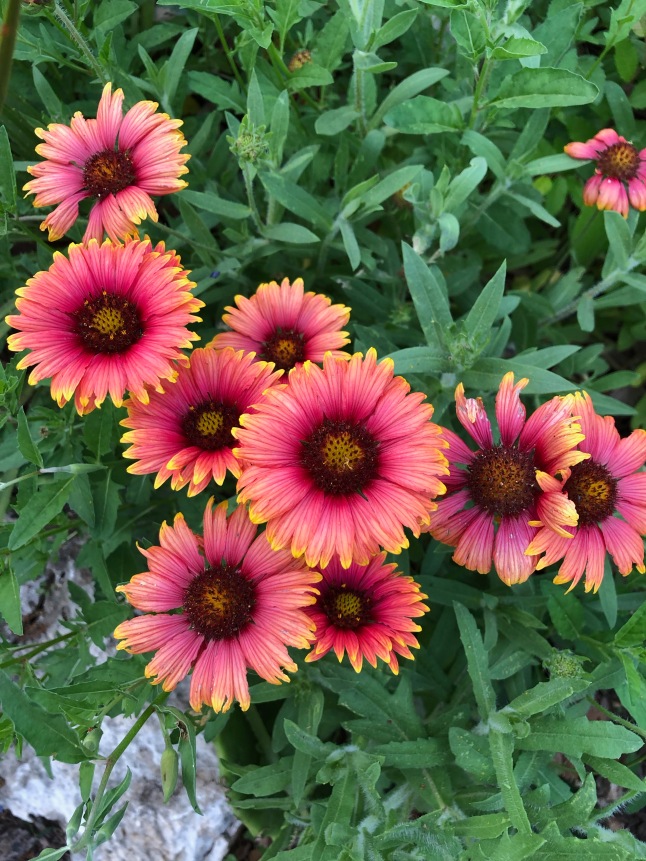 On one recent wet morning I was firing up the acrylics in the garage when I noticed Lucy and Marco noticing something. 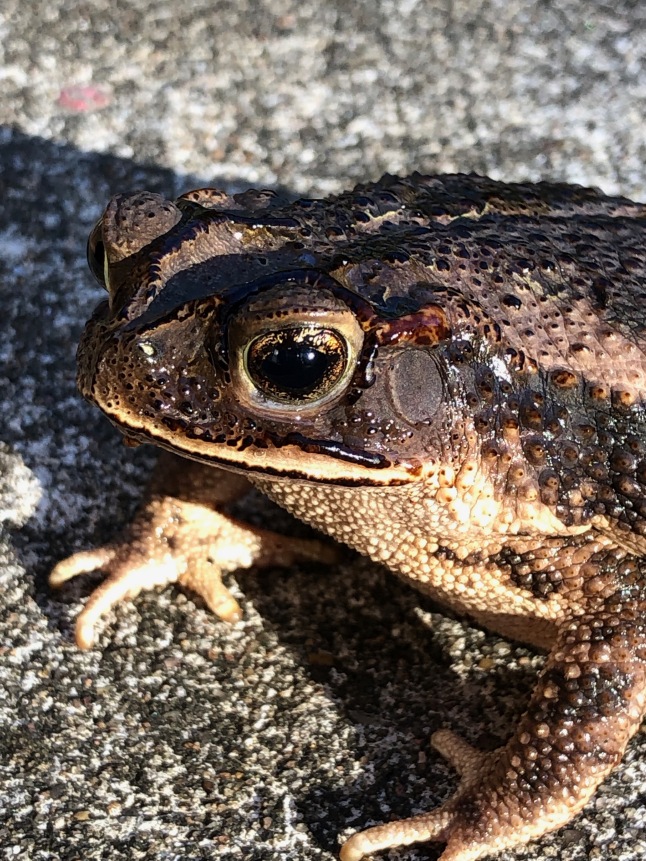 This sweetheart, about the size of my fist, lives in the space between the driveway and a corner of the garage. Which is the place to which I escorted him/her while shooing the cats away to go notice other things.

One thought on “Good Times for Flower Lovers”